Since 1797 there has been a weekly or daily newspaper in Brattleboro for all but four years. It started with Benjamin Smead’s paper the “Federal Galaxy” in 1797 and goes on to include William Fessenden’s “Reporter” in the early 1800’s, the “Vermont Phoenix” for over 80 years, and the “Brattleboro Reformer” under the banner of Windham County and Brattleboro for over 140 years.

In 1798 Benjamin Smead also printed the first book in Brattleboro, a sermon given by Reverend William Wells. Shortly thereafter, William Fessenden came to Brattleboro and expanded the book publishing industry. During the ten years that he was active, he produced a considerable amount of printing and made Noah Webster’s American Spelling Book a best seller. The book taught children how to read and spell. Fessenden also built a paper mill near the convergence of the Whetstone Brook and the Connecticut River to supply his own presses. 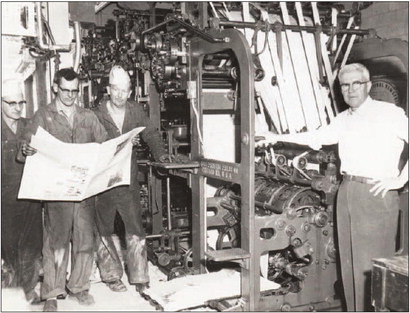 Over 200 years ago John Holbrook was printing books and pamphlets in Brattleboro and sold more than $500,000 worth of printed material. In 1816 he began publishing a large family Bible. It became a best seller and competed favorably with publishing houses in Philadelphia, Boston and New York. Between 1816 and 1852, eight different firms connected to the Holbrook family published forty-two editions of the Bibles. What made these books stand out were the engravings and illustrations that accompanied the text. The Brattleboro Historical Society has a first edition of one of the 1816 Holbrook-published Bibles and you can see the copy in our Research Room on the third floor of the Municipal Center.

In 1866 George Crowell came to Brattleboro to work in the publishing industry and within two years he began what became the most successful women’s weekly newspaper of the time. The Household Magazine was published out of the Crosby Block offices on Main Street and by 1890 there were 90,000 subscribers.

Edwin Hildreth came to Brattleboro from Hinsdale in 1881 to learn the printing trade. In 1887, after the death of the owner, Hildreth purchased the printing business and established E.L. Hildreth and Company. By 1890 the company expanded and moved to Harmony Place in downtown Brattleboro. It continued to flourish and became one of the largest printing establishments in New England. The firm’s connection with the Yale University Press was an example of how 3/4s of the company’s trade was done with entities outside of Vermont. E.L. Hildreth operated in Brattleboro until 1949 when it relocated to Bristol, Connecticut.

In 1954, the printing company Alan Brown Incorporated was struggling to compete with larger bookmakers. They employed 90 people, were located in the Harmony Lot and needed to expand or leave town. Local business owners did not want to lose a large employer so they got together and helped organize a plan to build a new 100,000 square foot building on Putney Road so the Brown Company could grow. The new building on Putney Road would become known as the Book Press and would more than double the size of the Brown book making business. Within ten years the Book Press was producing over 20 million books a year and employing close to 900 people.

The Stephen Greene Press began in 1957 and published great books like Animals Nobody Loves by Ronald Rood and The Damndest Yankees: Ethan Allen and his Clan. The Stephen Greene Press successfully operated for twenty-one years before it was sold to a Boston publishing company.
Much of the information gathered for this article comes from a local printing history compiled over fifty years ago by the publisher and editor of the Brattleboro Reformer, John Hooper.