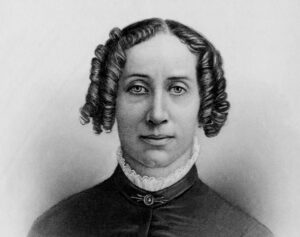 Clarina Howard Nichols (1810 – 1885) was an advocate for human rights. Born in Townsend, VT she went on to become the publisher of the Windham County Democrat newspaper in Brattleboro, where she expanded coverage to include women’s rights and equality for all. Her writings are credited for changes made in Vermont legislation providing for more rights.

After the death of her second husband (having successfully divorced the first), Clarina moved her family to Kansas when the Kansas-Nebraska Act of 1854 threatened to establish slavery outside of the South. In Kansas, she continued writing about and advocating for equality, and again had significant influence on laws passed to ensure those rights. Her dedication to ensuring those rights continued when she moved to Washington D.C. and California.

Student work, such as the BHS podcasts, will be incorporated into professionally produced audio for the ‘Brattleboro Words Trail’.