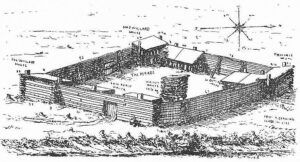 A sketch of Fort Dummer by Charles J. Brasor. Courtesy of the Brattleboro Historical Society

Fort Dummer was built on the banks of the Connecticut River in 1724.  Its purpose was to protect English settlements in northern Massachusetts. There had been a series of attacks by the Abenaki and the French in this area and the Massachusetts colony built the fort to protect these settlers.    Northampton and Northfield, Massachusetts were under constant threat of attack by an Indigenous leader known as Grey Lock and the French.  The Abenaki viewed the English colonizers as invaders and fought in hopes of stopping the encroaching English advancements up the Connecticut River.

When the fort was built it was immediately attacked by Indigenous people attempting to protect their land and way of life.  Reports at the time recorded three or four English soldier deaths, but the fort withstood the attack.

In 1737 English built houses near Fort Dummer.  These were attacked by the Indigenous people as well and English settlers were killed and kidnapped.  This continued for the next 20 years. This region was located on the front lines of the Indigenous war with the Colonizers. English soldiers were sent into Vermont and Canada to destroy Indigenous villages.

As time went on, the fort became a trading station and, as the fighting went further north, a jumping off point during the French and Indian Wars.  After the war the land was used as a farm and settlers began taking parts of the fort for various building projects.  As the years continued, people collected artifacts from the old fort area–arrowheads, clay pipes, and nails were found in the farm soil as it was turned over every spring.

This is where Walt Harrington comes into play.  Walt was born in Brattleboro in the 1920’s and his family moved to Guilford when he was very young.  He grew up in Guilford and served in World War II as a pilot. Walt was a founder and trustee of the Brattleboro Historical Society and in the early 1970’s he began collecting artifacts around the portion of the Fort Dummer site that was above water.

In 1976 Walt Harrington organized almost 30 amateur archeologists (mostly local folks) to excavate the exposed land where Fort Dummer had been located.  He needed to get many permits, coordinate with the Vermont Archeologists Office and borrow heavy equipment to get the project off the ground.  He also needed to coordinate with the owners of the dam as they were only going to lower the water level for a week.  With Walt’s guidance, the group of amateur archaeologists was able to find the northwest corner of Fort Dummer and performed a dig of the site that produced many artifacts.  Some of the more interesting artifacts were Irish coins from 1723.  What were Irish coins doing in Vermont?  It turns out the British had produced the coins for use in Ireland but they were not very popular there so they were circulated in the American colonies instead.