Howard Philips Lovecraft (1890 – 1937), was an American writer who achieved posthumous fame through his influential works of horror fiction. He was virtually unknown and published only in pulp magazines before he died in poverty, but he is now regarded as one of the most significant 20th-century authors of horror and weird fiction. 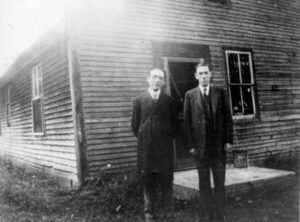 Lovecraft frequented the Brattleboro area, and his story “The Whisperer in Darkness” was set in West Brattleboro after the massive flood of 1927.

“I’ve never seen no country niftier than the wild hills west of Brattleboro,” Lovecraft wrote to a friend. “The nearness and intimacy of the little domed hills become almost breathtaking. Their steepness and abruptness hold nothing in common with the hum-drum standardized world we know, and we cannot help feeling that our outlines have some strange and almost forgotten meaning.”  HP Lovecraft Historical society made a film about the story which was shot in the area.

Students in Jennifer Kramer’s class are engaging in place-based learning, including reading Lovecrafts’ stories, and exploring sites he frequented. Their research and content created will contribute directly to the Brattleboro Words Trail segment on H.P. Lovecraft.