Saturday, March 28, 1920 the Hinsdale Bridge between Brattleboro and Island Park collapsed into the Connecticut River. The winter had produced a great deal of snow, a warm spell caused a quick melt, and eight to ten inches of ice were still on the river. The Brattleboro Daily Reformer gave the following description of what led to the bridge collapse. 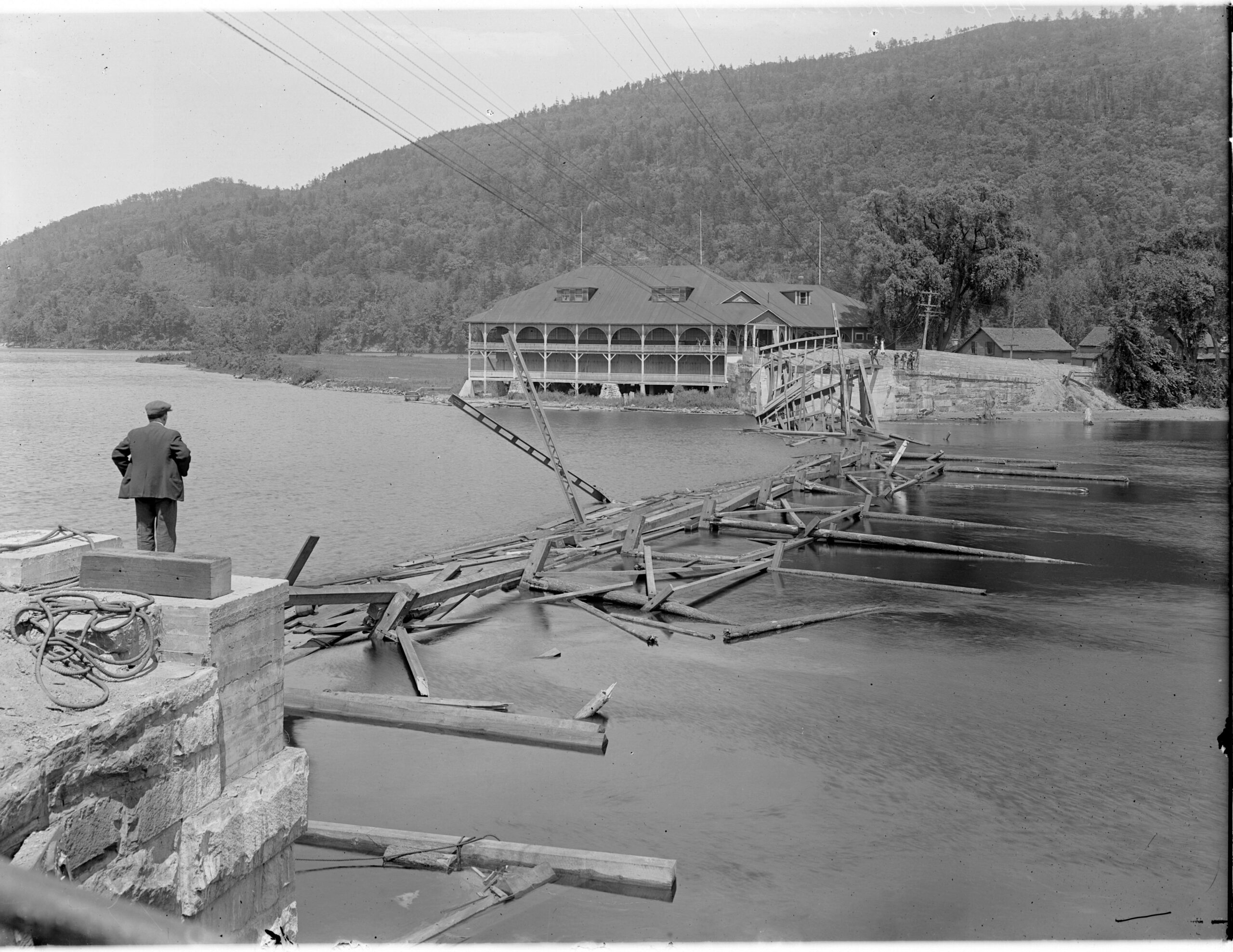 “The effect of the warm sun on the superabundance of snow in the woods was beginning to be felt…Brooks swollen by the contents of other brooks fed by smaller tributaries had been pouring into the Connecticut River for days, and the accumulated volume reached flood proportions…The ice jam at East Putney broke away about 5 o’clock, snapping off trees on the river banks as though they were toothpicks in a giant’s hand.  When the river here began filling…it was known that the East Putney jam had arrived…With the water higher than ever the thunderous grinding and pounding against the bridge girders became a continuous rumble and roar, and under the pale light of the moon, it filled one with awe and a sense of impending calamity.

From behind the rounded embankment wall at the west end of the bridge, a monster cake of ice insidiously crept into view and planted itself against the trembling framework of steel.  It would turn neither to the right nor left, nor would it sink beneath the surface and pass on.  It was brewing trouble.

Simultaneously, as if by villainous connivance, another big cake forced itself upon the east end and found secure lodgement, hemmed in by a myriad of smaller accomplices.  Gradually the banks of anchored ice expanded towards the middle of the river, slowly but surely sealing the fate of their victim.

The jam was complete….A crowd of over one hundred spectators waited an hour to see whether the bridge would survive…There was an ominous creaking of floor timbers. Men and women fell back instinctively to be out of harm’s way.  There was a man on the bridge.  A moment before he had started to cross.  Now he was returning.  Why does he take such a chance?  A chorus of voices yell at him.  He moves leisurely, then increases his speed…

Huge pieces of steel in the center of the structure begin to bend, rivets snap, the flooring heaves.  In their excitement, the people cling to each other.  The bridge buckles in the middle, the high arches topple over, and with a mighty crash that startles persons rods away, it gives up the ghost and sinks heavily to the bed of the river, said to be 49 feet below the surface in some places, while the victor rushes over the spot and conceals every vestige of its victim from sight. 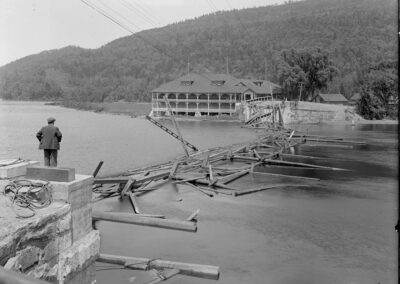 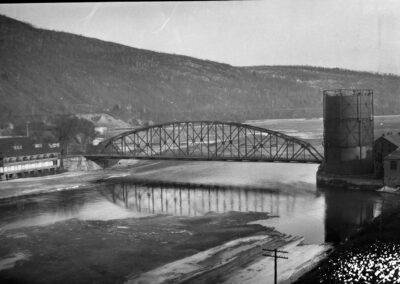 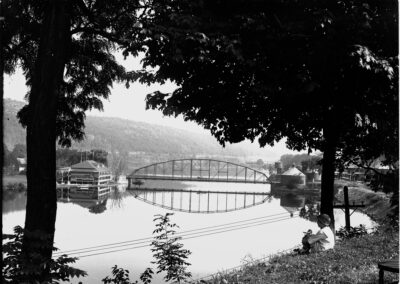 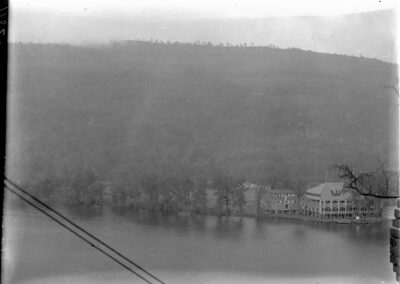 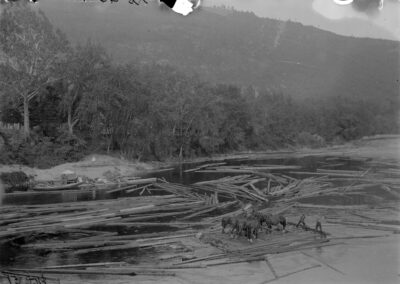 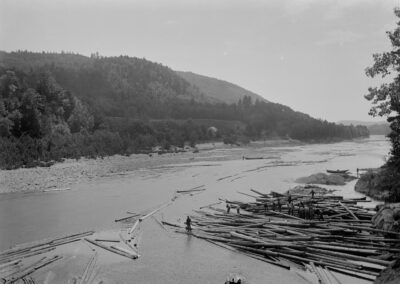 View of the Site of Fort Dummer in Brattleboro from Hinsdale, NH

David A. Henry’s stereoview of the site of Fort Dummer from Hinsdale, NH. Courtesy of the Brattleboro Historical Society 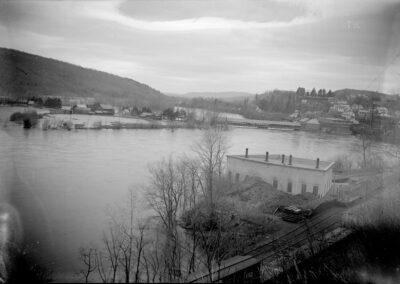 It was a little before 10 pm.  A crowd of people had been watching the ice pile up behind the bridge for almost an hour.  Seventy-year-old Cornelius Flanigan left Hoadley’s Restaurant in the Barber Block on Main Street and walked past Police Chief Wilson.  Flanigan told the officer he was heading home.  Flanigan lived on the island.  Wilson told him the bridge was unstable but Flanigan thought the bridge would hold.  When Flanigan was almost halfway across he heard the support beams begin to crack. He turned back and the bridge began to heave.  People called to him to hurry and he increased his speed hoping to make it back to land.  When he was about 10 feet from the Vermont shore the bridge collapsed and he was swept into the raging river full of ice.

According to the Reformer, “Mr. Flanigan was practically a lifelong resident of Brattleboro…In his early life and for a long time he was employed by the Estey Organ Company…Later he devoted his time to plumbing…He was a good mechanic and possessed many likable qualities.”

The destruction of the Hinsdale Bridge one hundred years ago led to the construction of the bridge we have today. This bridge is scheduled to be replaced within the year. The replacement will be the eighth bridge that has spanned the distance between Brattleboro and the Connecticut River island, (ninth if you count the temporary bridge that collapsed in December 1920).

On September 11, 1921, the present Hinsdale Bridge formally opened to traffic. The process of creating the new bridge had been an ugly affair. The Connecticut River Power Company, owners of the Vernon Dam, were sued by Brattleboro because many believed the dam had contributed to the high water and ice that destroyed the bridge and took the life of Cornelius Flanigan.

The present Hinsdale Bridge has been operating for 99 years.  If the replacement plans are completed on time, the old bridge should be retired as it passes the century mark for service.  We’d like to thank 8th grade BAMS students Trevor, Z’Aira, Cameron and Maya for helping with the research for this story.