How Did Flatboats Work?

This week in Brattleboro history we are going to focus on early trade and transportation.  Before interstate highways and train rails there was the Connecticut River.  The Abenaki used the river to trade tools and goods throughout New England. 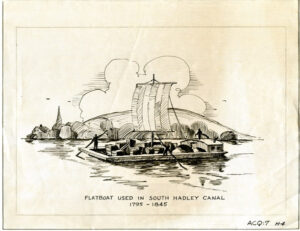 When Europeans arrived in the 1700’s, they too, wanted to move goods along the Connecticut River.  However, falls in Hadley and Turner’s Falls limited the amount of goods that could be moved along the river at one time.  Most merchants looking to move goods into Vermont chose to use oxen and carts.  This was slow and expensive.

In 1795 a canal was built around the falls in Hadley, Mass. and in 1798 a canal was completed around Turner’s Falls.  This opened up the ability to ship goods from Brattleboro to Hartford, Connecticut, and then to the Atlantic Ocean.

Brattleboro’s John Holbrook was the first businessman in the area to take advantage of the canals and began a trade business with flatboats along the Connecticut River.  In 1800 manufactured goods were scarce north of Hartford, Connecticut.  Holbrook would transport food and farm items south into the cities of Springfield, Mass. and Hartford, Conn. and would bring back manufactured items that could not be found in rural Vermont.

Flatboats used sails and man-power to move freight up and down the river.  Sometimes, where difficult rapids were located, oxen and horse on the shore were attached to the flatboats to pull them beyond the difficulties.  But most of the time it was a crew of five who would guide the boat along the river.

Typically, flatboats could transport between 30 and 40 tons of freight, but some boats were large enough to carry 50 tons.  The boats were 65 feet long and 13 feet wide, (so they could fit through the canals).  The ordinary crew was made up of five men; a captain, who spend most of his time steering the boat with a tiller, three bowmen who handled 12 to 15 foot poles to pull the boat through the water and, usually a boy, who was brought along to cook.  Two of the bowmen worked on the side next to shore and one had a longer pole for the deeper water on the other side.  The captain would pitch in if there was rough water or strong head winds.  A roundtrip between Brattleboro and Hartford, Connecticut could be as short as six days or as long as two weeks, depending upon the water level and wind conditions.

Going down the river the bowmen typically rowed to assist the motion of the current.  Sails were used when the wind was right.  Coming back was the more challenging part of the trip.  Winds from the south often occurred and helped bring the flatboat back up the river.

The work lasted from very early morning to dark and the pay was about $1.25 a day.  It was hard work but it gave young men from Vermont farms a chance to see the cities of Springfield, Massachusetts and Hartford, Connecticut.  For some of the rugged and more adventurous, being a riverman was a good profession.

Flatboats were the main form of trade between 1800 to about 1840.  Steamboats were larger and quicker, and began running on the river in the 1820’s, and the train came to Brattleboro in 1849.