The Guilford Street Ski Tow opened to the public in January 1938.  It operated on the Clark Farm in the area now occupied by Living Memorial Park.  For its time, the tow was one of the most modern in New England.  An all-day ticket cost 35 cents and a half-day ticket was 25 cents.  In 1939 lights were added and the tow operated three nights each week.  The ticket price for night skiing was 25 cents.

The primary people who got together in the early summer of 1937 and formed a plan to build and operate a ski tow in Brattleboro were Robert Billings, Elliot Barber, Floyd Messenger and John Dunham. In 1937, on the Charles Clark Farm, where the Living Memorial Park is now located, construction of the “Guilford Street Ski Tow” was begun.  The farm had been idle for a few years so there were no farming operations interrupted by the creation of the tow.

It was an 1100 foot rope tow that had its terminal building built up on two large timbers at the bottom of the hill. It was quite modern by any standards in that it had a fairly large electric motor for power that would easily handle 300 skiers per hour. When the rope reached the top it traveled around a three foot bull wheel and came back to the bottom riding on Model A Ford wheels fixed to the top of light poles about 16 feet high and 60 feet apart. At the end of the day the bottom rope that traveled along the ground pulling skiers to the top of the hill was lifted up by a ski patrol member and placed on the lower wheel about five feet off the ground so that it would not freeze to the ground.

The facility opened to the public the first Saturday in January 1938. At the time, it was one of three rope tows operating in New England. 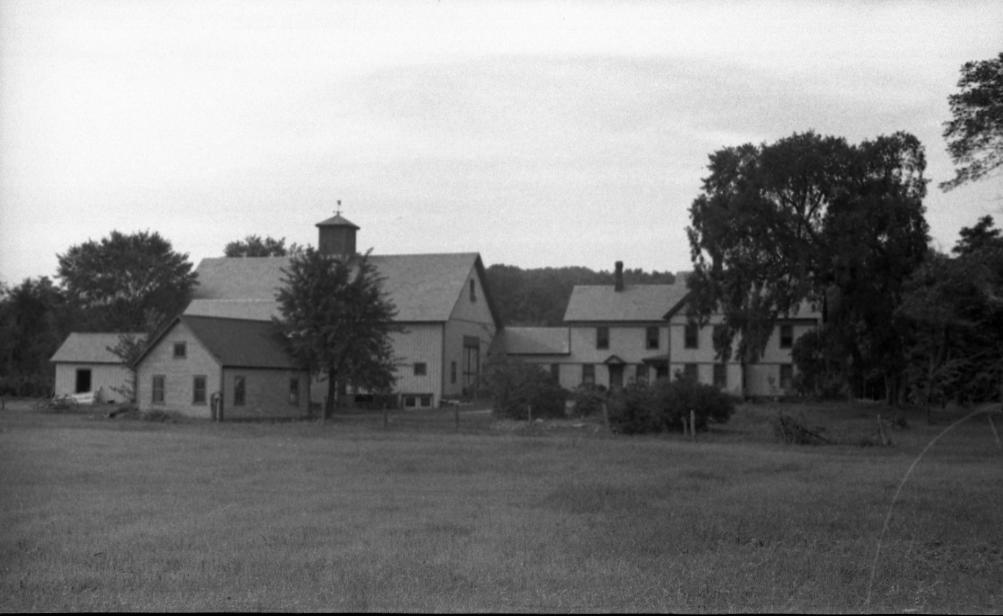 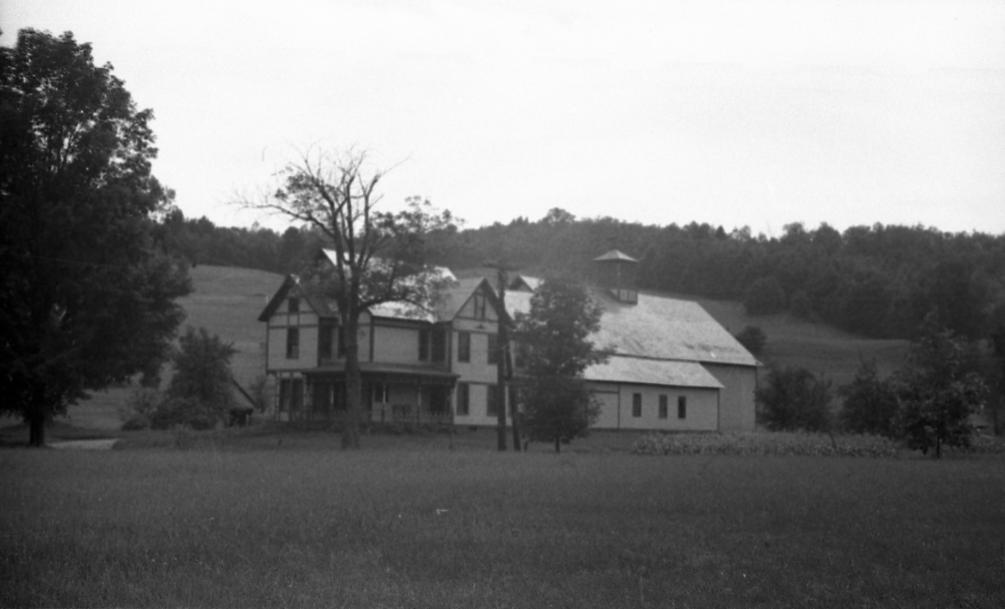 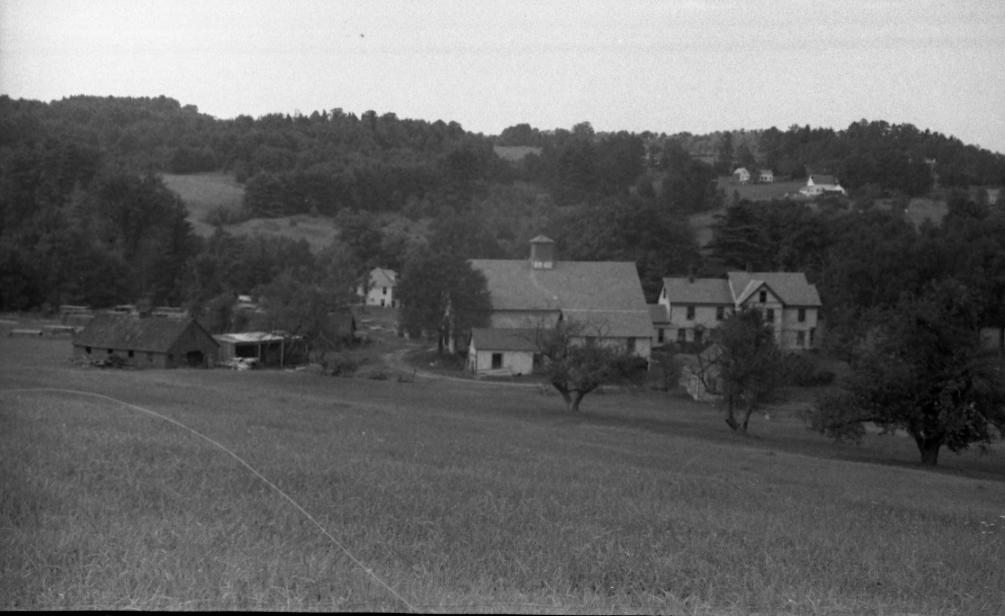 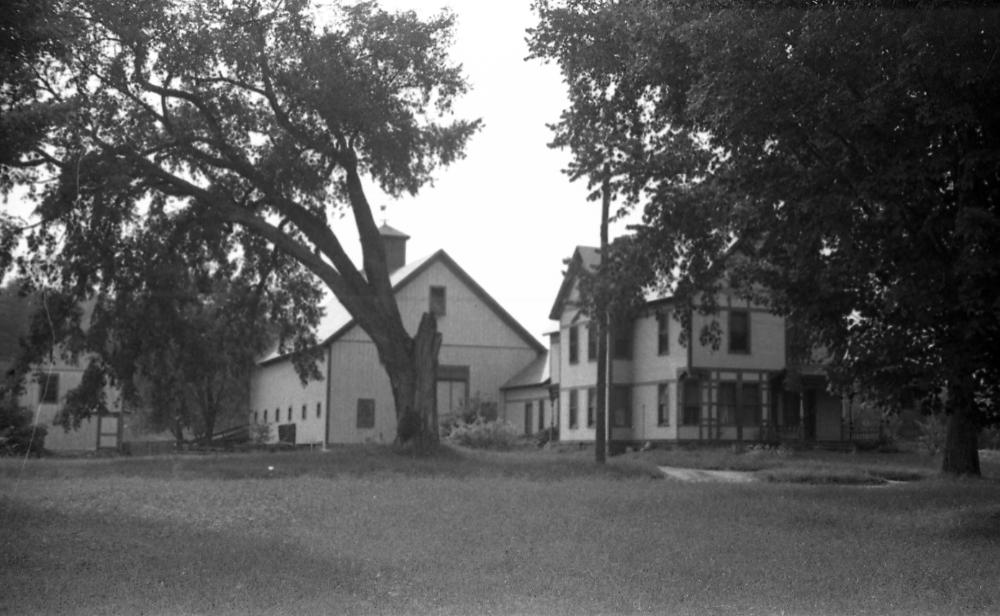 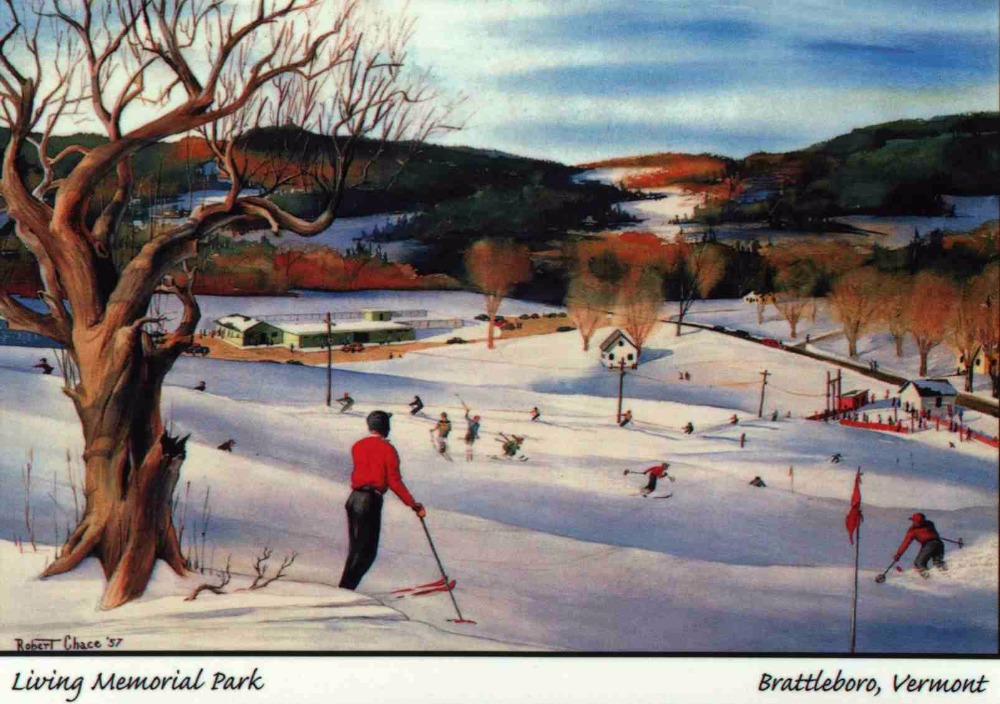 After World War II was declared on December 8, 1941, life changed. Members of the Vermont National Guard unit in Brattleboro left in mass, more than 200 at one time. Men were being drafted, and men and women were volunteering in considerable numbers. Of the four men who created the rope tow, only John Dunham remained behind, and with the help of Holland Douglas and several others, the Ski Area continued to operate during the war. In 1948 the rope tow was removed and installed at the nearby Sugar Bush ski area in Jamaica, Vermont.

Living Memorial Park has an inspiring history.  In 1944, a letter written by William Evans was published in the Brattleboro Reformer proposing that a fund be established to create a “Living Memorial” to honor those men and women who served during World War II.  Typically, after a war, towns would raise funds and a statue or monument would be created to remember the sacrifices of those who served.  This proposal was different.  The letter suggested that a fund from the purchase of War Bonds be established which would create a “Living Memorial”.

War Bonds sold for $18.50 and could be turned in after ten years for $25.  The Bonds were used by the U.S. government to help pay for the war.  Letter writer William Evans bought the first War Bond for the Living Memorial Fund and the idea caught fire.  By the end of World War II almost $34,000 worth of War Bonds had been donated to the fund by local citizens, businesses, and clubs.

In 1954, as the Bonds were close to maturity, it was suggested that the funds be used to buy the old Clark Farm where the rope tow had been in order to establish a Living Memorial recreation area with a swimming pool and other facilities.  This would also help solve the uncomfortable problem of water contamination at the West River Bathing Beach.

The 53-acre Clark Farm was for sale for $35,000 and the Clark family decided to donate the difference between their asking price and the $33,875 collected in the War Bond fund.

In 1955 and 1956 Living Memorial Park came to life.  The town voted to spend $115,000 to build a swimming pool.  The new ski tow went in through a donation from the Rotary Club.  The rope tow was upgraded in 1966 to a Doppelmayr T-Bar. The Lions Club built the road leading to the upper level of the park.  A swamp behind the swimming pool was converted into a skating pond and the Kiwanis Club built the shelter at the top of the hill.

The American Legion funded the construction of the softball field next to the pool and the Brattleboro Athletic Club and Dunham Brothers donated money for the Small Fry baseball diamonds.  Many other clubs and individuals made donations to create the landscaping and playground adjoining the swimming pool area.

In 1974 the Nelson Withington Skating Rink was constructed and in 1975 the tennis courts were created.  In 1984 the Rotary Club supported the building of the outdoor theater and in 1987 another  Small Fry field was built.  The park continues to adjust to the needs of the community.

Through the years Living Memorial Park has been a collaboration of the town and civic organizations.  In 1995, because of unpredictable snow and financial considerations, the town decided to stop operating the ski tow that had been in use since 1955.  In 1997 a non-profit organization, Living Memorial Park Snow Sports, took over the ski tow and has been operating the lift ever since.

Living Memorial Park is a unique place.  It grew out of a respect and recognition of those who served during World War II, it has become a home for small town community memories and underscores the claim that there is only one Brattleboro.