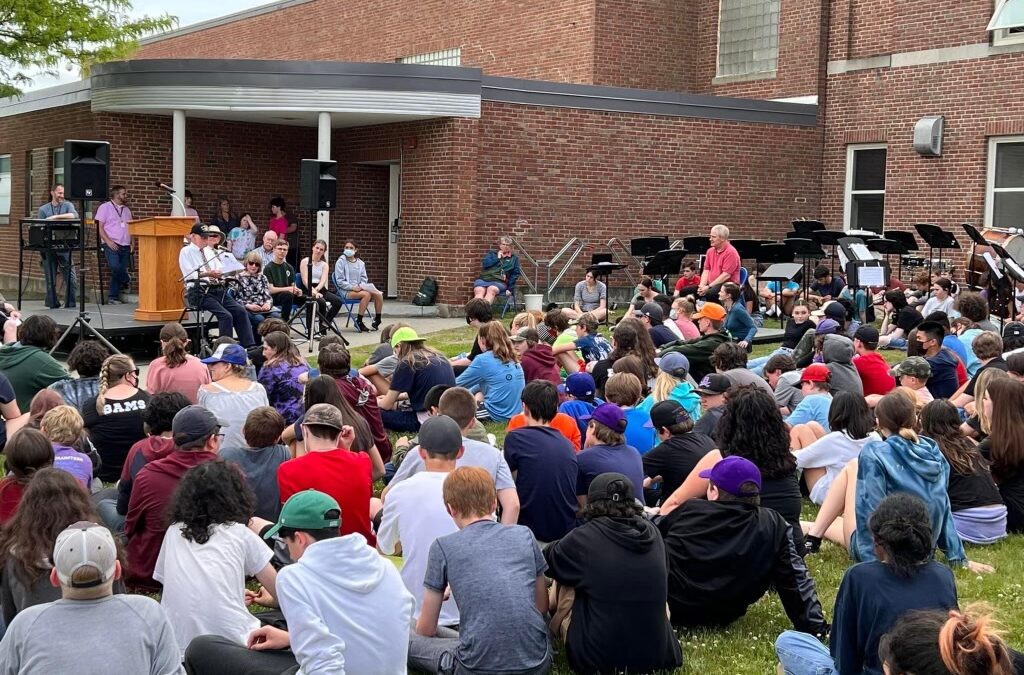 spoke to an audience of more than 400 people on the front lawn of BUHS.  He shared stories of growing up in West Brattleboro and attending public schools.  This was part of a Memorial Day Remembrance that included students and staff from BAMS and BUHS, and members of the public.  Here is the text of Mr. Hamilton’s talk…

“Good Afternoon.  I was born in Brattleboro in September, 1922.  I grew up on the family farm on Hamilton Road in West Brattleboro.  We had cows and grew corn and hay to feed them.  We also had vegetable gardens and apple, pear and peach trees.

I had one sister and three brothers.  My sister and a brother were older than me and two brothers were younger. We lived in a multi-generational household.  In the home were our family of seven. My father’s parents, one of his brothers and my mother’s sister.  My parents were married in 1917.  Soon they started our family with the birth of my sister.  My grandmother died when I was very young.  Our father died of pneumonia and measles a little over a year later in 1929 when I was six years old.  Our mother and grandfather raised us on the family farm.

We kids walked a half mile down the dirt road to catch the horse drawn wagon to take us to Academy school in West Brattleboro.  We picked up other kids along the way. After I had completed my first grade, a motorized school bus picked us up at the bottom of our road.  The bus was more comfortable and we did not have to start as early. As we got older and entered high school, we depended on the family car for transportation.  I entered Brattleboro High School in 1936 and graduated in 1940. When we drove to high school we parked in the back of the building and entered through the back door.

Once inside, my first impression was there were lots of stairs, front stairs and back stairs on three floors. The lunch counter was on the third floor of the high school.  When Edna De Lottinville’s sheet pan of brownies were brought in the aroma wafted throughout the building.  The De Lottinville’s bakery was on Main Street hill on the North side of the Public Market, across from Flat Street.   I seldom bought food at school but if I had had a half breakfast, I’d buy a lettuce sandwich for 5¢ and a brownie for 25¢. A couple of times I walked down the front steps to the other side of Main Street and bought a hot dog at the Royal Diner.  The Royal Diner is now Chelsea Royal Diner in West Brattleboro.

I remember some of the teachers:  Miss Lord, an English teacher, stood very straight and was very proper.  Ward Boylston taught biology.  He was an ex-Navy boxer.  Under his jacket he had very large biceps. If the lesson was finished and we had a couple of minutes before the bell, he would rest his elbow on the piano in the classroom and flex his muscles. As he did that his jacket moved up and down.  Then he would flash that big smile.  It was a light moment and made a big hit with me.

The first bell, a buzzer type, was at 8:00 AM.  The classes were 40 minutes long and the bell sounded at the end of each class.  School was out at 2:00 PM. Study hall was on the second floor at the front of the building.  When Mr. Nelson was the monitor of study hall, he kept his eye on us and was very strict.

My gym class was held once a week at the Armory on Main Street.  Some gym instructors would lead exercise classes. I often played basketball during gym class.  Once I fell and severely floor-burned my left knee.  Two days after that, I had a high fever and had to leave school early because my knee injury had developed into blood poisoning.  I was home recovering for three weeks.  It was an anxious time for my mother as she cared for the swollen knee.

I took the Agricultural course and Mr. Granger was the teacher.  I was a member of the Future Farmers of America.  I took on a project of raising chickens at home.  Mr. Granger helped me to convert an old shop into a chicken house.  He helped me set up a brooder stove.  The coal burning stove was used to keep the chickens warm.  My chickens came from Clayton Renfrew who had a sizable poultry farm on Melrose Street.

I butchered and dressed chickens for wholesale delivery to the Public Market on Main Street.  I had lists of customers provided by Mr. Boylston that represented the who’s who of Brattleboro.  I’d use this list to market my fully dressed chickens.  I refined my business as I gained more experience.  Mr. Granger gave me advice and was helpful to me all along the way.

In the Ag course we’d go on field trips to nearby farms to see herds of cattle and orchards of fruit trees.    A rotten apple was thrown by one kid at another when Mr. Granger wasn’t looking. We were there to learn to select the right branch to graft to another tree. The Ag boys were in charge of the concessions at football games and at the Harris Hill Ski Jump.  I cooked hotdogs and sold hotdogs and candy bars during many football games and at the ski jump.

In my senior year I took a job at Eastern States Farmers Exchange located on the other side of the railroad tracks on Depot Street.  I was a laborer and handled 100-pound bags of grain and made deliveries to farms in the area.  My wage was 40¢ an hour.  It was a job which I appreciated and I already had experience. I graduated in 1940 with 88 people in our class.

When it was time for graduation, the events associated with it were spread out over several days. The Class Day exercises were held on an afternoon in June on the lawns of the high school.  The band played music.  The seniors formed a procession at the rear of the high school and marched to seats on the front lawn facing a platform. The exercises were composed of prose and verse read by several members of the class.  After the exercises the class proceeded to the south side of the building and we planted ivy that would grow alongside those vines that had been planted by previous classes.

Graduation exercises were held the next evening at 8:00 PM in the Community Hall on Main Street.  That was in the Brattleboro Memorial Armory where I hurt my knee playing basketball.  The building was built after World War I to honor veterans of the Great War and to provide a community meeting space.  It is now called the Gibson-Aiken building. Our class was the 56th graduating class of Brattleboro High School.

On the third day of graduation festivities, the Alumni Parade was formed in front of the high school at 7:30 PM.  The parade proceeded on a course starting up Linden Street, going around the Common and down Putney Road to Main Street.   I was with my class, wearing our caps and gowns, marching at the end of the parade.  After the parade everyone met in the Community Hall and prizes and ribbons were awarded.

In 2001 both my wife, Joyce and I were honored to be chosen Grand Marshal of the Alumni Parade.  We walked the whole parade route. The Alumni Parade was discontinued in 2006 in its 100th year, due to lack of interest and funds.

As we celebrate Memorial Day this year, I recall my childhood days at the end of May.  Back then it was called Decoration Day. Everyone brought flowers to the graves of those who had served their country and other loved ones who had passed away.

Within two years of my graduation, I was drafted into the Army and was assigned to the Army Air Corps to serve my country.  I was a radio operator and gunner on a B-17.  During our ninth mission we were hit by enemy fire and four crew members were killed in action that day.  The remaining five of us bailed out into enemy territory and were captured. I spent ten months as a prisoner of war.

After that experience I have a greater appreciation for Memorial Day because my four crew members who were killed were never able to return to their families as I was welcomed home by mine. Memorial Day is a day to remember and appreciate those who lost their lives protecting our freedoms.

I’m happy to be here today.  Thank you for allowing me to go back to my school days and remember what it was like after all this time.”

Mr. Hamilton’s presentation was a rare gift.  We thank him for his generosity and kind-heartedness. 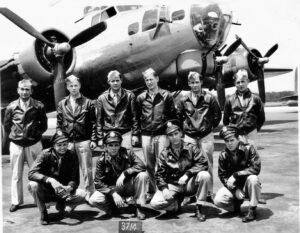