Gravestone epitaphs have led us on interesting journeys.  At Prospect Hill Cemetery there is a stone that overlooks the Connecticut River.  Carved on one side is the following; “The grave of Alanson D. Wood, who was killed instantly on this river by the explosion of the Steamboat Greenfield, May 18, 1840, age 30.”

The story of Alanson Wood is a sad reminder of unsuccessful attempts made to bring profitable steamboat operations to the area.  Until steam-powered trains arrived in the 1840’s the main means of transportation north and south along the Connecticut River Valley was the Connecticut River.

In the late 1700s, canals and locks were begun to make the river more navigable.  People and goods could travel from Long Island Sound to Hartford, Connecticut with relative ease but north of the city, there were waterfalls, rapids, and shallows that hampered the transportation of passengers and goods to northern Massachusetts, New Hampshire, and Vermont. 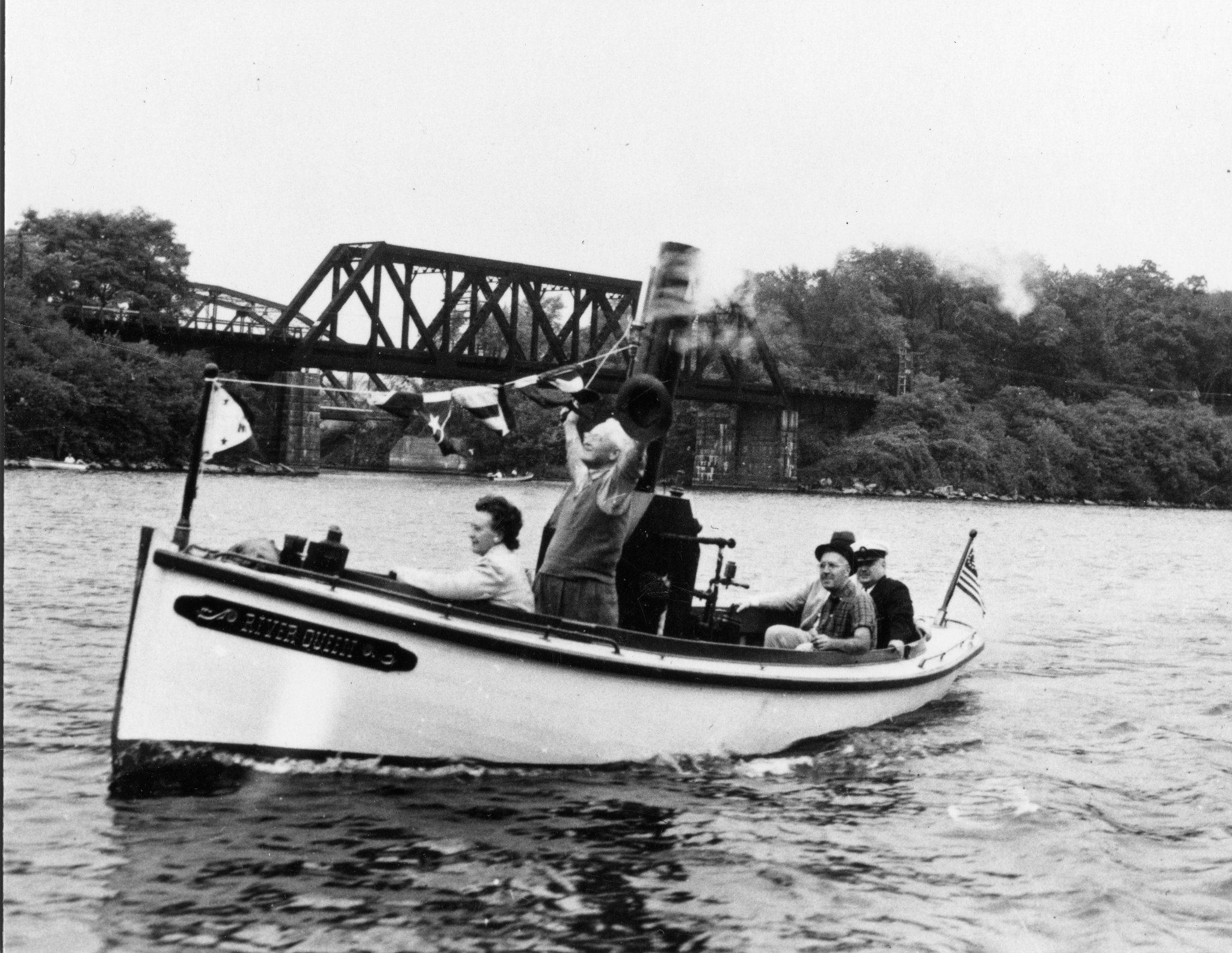 The South Hadley Canal opened in 1795.  It allowed for the bypass of a 53-foot drop in the river.  The Turners Falls Canal was completed in 1798.  The canal was 2.5 miles long and had ten locks to raise and lower the water level.  North of Brattleboro the Bellows Falls Canal was completed in 1802.  North of Bellows Falls, in 1794, there was a canal chartered near Hartland, Vermont. Another canal near Wilder, Vermont was not completed until 1810.  In theory, these canals made it possible to travel from the falls at Barnet, Vermont, (a few miles south of St. Johnsbury), all the way to Long Island Sound, (more than 230 miles away).

The Connecticut River between Hartford, Connecticut and Brattleboro was challenging.  A boat that displaced more than a foot or two of water could easily run aground. The first boats, (other than Native American canoes), to travel commercially on the river were flat boats.  Flatboats were about 70 feet long and had sail masts that could stand over 30 feet.  When the wind was right boat captains relied on the breeze to help move the boats through the water.  However, when the canals were first completed, flatboats were mostly powered by men and oxen.  Men would use poles to bite into the riverbed and then walk the poles along the length of the boat to move the boat through the water.

Above Greenfield, Massachusetts more men were usually needed to walk the boats through the swift water.  At Vernon, the area near the current dam was known as Cooper’s Rapids and oxen were often attached to flat boats from the shoreline to help pull them through the rapids.  The Connecticut River near the islands between Hinsdale and Brattleboro was known as “the chute”.  Swift water that swirled between the islands and the shore often required winch and oxen assistance to get the boats to the landing zone at the end of the present Arch Street.

The opening of the Connecticut River as a commercial transportation artery was seen by many as a great economic boom to the area.  Flat boat trade was more efficient and convenient than moving goods by wagon and coach.  The flatboat trip between Brattleboro and Hartford, Connecticut could take ten days but the boats would carry up to 20 tons of freight.

In the early 1800s, steam engines were first mounted on paddle wheel boats and used to propel the boats through the water.  Trial and error attempt to improve steamboat designs were taking place around the world.  In 1813 the first commercial steamboat traveled from the mouth of the Connecticut River to Hartford.  By 1822 steamboats had become the commercial vessel of choice south of Hartford.  In 1826 the Connecticut Steamboat Company wanted to expand trade above Hartford and commissioned the construction of a new steamboat that could handle the swift currents and rapids found in the northern part of the Connecticut River.  The new steamboat was named Barnet because the goal was to travel from Hartford, Connecticut to Barnet, Vermont.

It didn’t work.  The steam engines did not prove strong enough to deal with the currents this far up the river and the boat was built too wide to fit between the locks at Bellows Falls.  The Barnet struggled to make one trip to Brattleboro, found it could not make it past the Bellows Falls Canal, and never returned to the area.

Despite this setback there was a strong desire to expand steamboat trade and travel above Hartford, Connecticut.  In 1831 a new corporation, the Connecticut River Valley Steam Boat Company was formed to build a series of steamboats that would, in stages, transport goods and people above Hartford, Connecticut.  The steamboats were designed to travel between the canals and locks, carrying people and pulling flatboats full of goods behind them.  The steam boilers were fueled with chopped wood.

The steam tug boats were designed to pull 4 to 6 flat boats behind them. Passengers could also buy tickets that would allow them to travel from one canal to another.  The company had been operating for less than a year when disaster struck.

On July 4, 1832 a steam pipe on the Adam Duncan burst, releasing steaming hot water and causing a passenger to jump overboard.  That passenger drowned.  The boat’s machinery was taken apart and never repaired. Another of the steam tug boats became grounded between canals and was damaged beyond repair.  Before the end of 1832 the Connecticut River Valley Steam Boat Company was bankrupt and selling its steam tug boats and flat boats at auction.  Commercial steam boats did not operate north of the Massachusetts state line again.

The Ariel Cooley was bought and sold a few times by various steam boat companies and continued to run between South Hadley and Turners Falls.  In 1840 it was purchased again and rehabilitated.  One of the changes included newly designed boilers that were meant to be more powerful.

The new owner renamed the steam tug boat the Greenfield and the boat took its maiden voyage in May.  The Greenfield was re-designed to be both quick and strong.  Competition between steamship companies was fierce.  Who could move the most freight the quickest?  Many people thought steam powered river transportation would be successful but few companies had been able profitable.  The new boat was looking to make a name for itself.

Alanson Wood learned about steam power from working in Brattleboro factories.  On the day of the explosion he was the engineer who operated the two new boilers on the Greenfield.  The designer of the new boilers was on board, hoping to set a new speed record.  There were six freight flat boats attached to the steamer in tow.   A local newspaper reported, “Perhaps no blame should be attached to anybody but we cannot refrain from believing that the boat was pushed harder than prudence and safety would warrant.  It was a new boat, and there was an ambition to establish a reputation for speed.”

On May 18, 1840 the steam tow boat, Greenfield burst her boilers.  The explosion killed all three men aboard. Engineer Alanson Wood, Captain John Crawford and designer of the boilers, William Lancey.  The Greenfield Boating Company had recently spent $6,000 on the lately re-built steam tug boat.

Efficiency, convenience, competition, and technological innovations are cornerstones of our society.  Unfortunately, in this case, advancing steam boat technology did not succeed in the Brattleboro area.  Within a decade of Alanson Wood’s death the steam-powered railroad arrived and the economic desire to develop the river for freight transportation faded away.