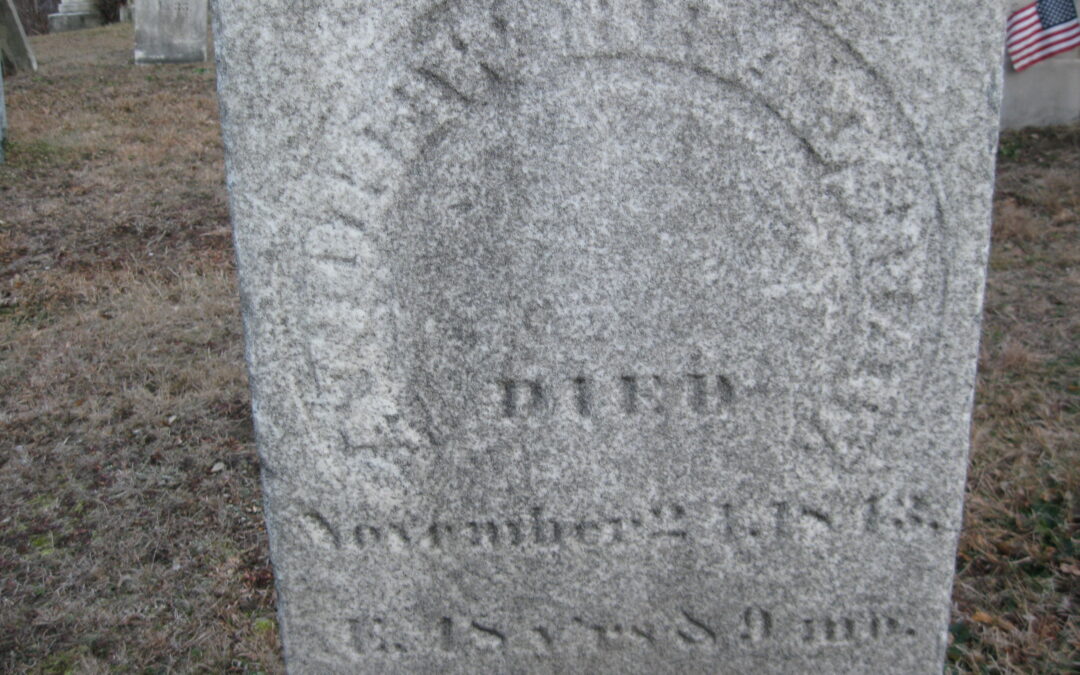 What was it like to be a young African American family settling into 1820’s Brattleboro?  In 1823 a young couple in their twenties, with a small child, moved to Brattleboro from Massachusetts.   Andrew and Phoebe Bradshaw rented a building on Main Street to begin their new life.  According to available information they were the only Black family in town.

In the 1820’s some northern states were taking steps to legally limit or curtail slavery, but it was also a time when laws and practices were often at odds with one another.  For example, in 1825 Solomon Bayley published a personal narrative of his experiences as an enslaved man in Delaware.  In the 1700’s the state of Delaware banned the sale of enslaved people across state lines.  It was an attempt at economically handicapping slave trade in the north. However, this did not stop Solomon Bayley’s owner from selling Bayley to a man from Virginia.  As this example illustrates, laws passed by state governments to limit slavery were not always embraced.

Numerous stories in the book, The Problem of Slavery in Early Vermont, 1777 – 1810, point out that just because a law is on the books does not mean it will be followed.  For instance, Vermont’s 1777 Constitution placed clear restrictions on slavery.  People twenty one or older were not to be enslaved for any reason.  Nevertheless, in the early 1800’s Brattleboro’s Royall Tyler found a fellow Vermont Supreme Court judge innocent of violating the Vermont Constitution even though he owned an enslaved woman for seventeen years in the town of Windsor, Vermont.

In 1823 the Bradshaws rented a two floor wooden building on Main Street that had been built fifteen years earlier.  The building was originally a harness shop, but the Bradshaw’s had other ideas for the structure.  Andrew opened a barbershop and offered cleaning services for wool garments and women’s dresses. He also bought and sold used clothes.   Phoebe opened a dining room that served working people good meals, desserts, soda and beer.  Local historian Mary Cabot said the restaurant was well received by local people who “liberally patronized” the dining room of “famous cook” Phoebe Bradshaw.  Cabot also pointed out that the Bradshaw restaurant was the first to serve ice cream in Brattleboro.

It was said that ice was stored in the dirt basement of the building and the Bradshaw’s would make the ice cream early in the day before patrons would arrive. The ice cream was stored in the dark, cold cellar in order to keep it solid throughout the day.  The building served many purposes as the Bradshaws also lived there. Later, in the 1880’s, the building was taken down and replaced by the Ryther Block.  Zephyr Designs is in the present location.

In 1834 the Bradshaws bought the building and the lot it was built on. They became African American landowners on Brattleboro’s Main Street at the same time the local paper was publishing articles in support of slavery and opposed to people of any color who were not of English, Protestant descent.

In 1835 Ethan Allen’s daughter, Lucy Hitchcock, moved back to Vermont from Alabama.  She brought with her two enslaved African Americans, a mother and a child.  After six years the husband of the enslaved woman was able to travel to Burlington, Vermont and purchase their freedom from Hitchcock.

In the 1830’s there was real conflict in Brattleboro over the topic of slavery.  Judge Royall Tyler’s son, Edward, had attended Yale College and became an Abolitionist.  In 1837 the first meeting of the Anti-Slavery Society was called in Brattleboro and Edward Tyler was the scheduled speaker.

Prominent Brattleboro businessmen were opposed to this meeting and arranged for two cannons to be set up outside the hall on Elliot Street where the abolitionist gathering was to take place.  The firing of the cannon, and clanging pots and pans, during the meeting were designed to make it clear that people were not happy with this organization establishing itself in town.

Brattleboro was a stop on the major stage coach runs between Boston, Albany and New York City.  During the summer months these stage coaches were known to transport wealthy southern plantation owners who traveled with their enslaved servants to the cooler climes of New England.  Brattleboro was one of the preferred destinations for these well to do southerners.

George Van Cleve wrote in his book, A Slaveholder’s Union, that slave-owners travelling to Vermont were usually not pressured to free the enslaved servants accompanying them because these “slaveowner sojourns” were not permanent stays but only extended visits.

What did the Bradshaw’s think when they looked down Main Street and saw enslaved African Americans climbing down from stagecoaches at the Chase Stage House?

About this time the Bradshaws took Francis Green into their home.  Almost 20 years old, Green worked alongside Andrew Bradshaw during the day, and stayed with the Bradshaws at night.  When Green gained confidence in his barbering skills, he moved to Greenfield, Massachusetts and set up his own barbershop.  He married there and became a father.

Andrew Bradshaw died in 1843 at the age of 48.  His body is buried in the Prospect Hill Cemetery.  After twenty years in Brattleboro, the Bradshaw’s daughter had grown up and met a man from the island of Jamaica.  They wanted to move to Boston so Phoebe sold her Main Street property and moved to the city with her daughter and son in law.  Phoebe sold her property to the highest bidder, who happened to be the publisher of the local paper, the Vermont Phoenix.  The same paper known for arguing that African American slavery was the uncomfortable price our country paid for keeping the United States economically sound and united.  What did Phoebe Bradshaw think as she climbed into the stage coach with her family and moved back to Massachusetts after twenty years in Vermont?

Information for this article was found in a 1994 series written for the Reformer by Anne Dempsey. 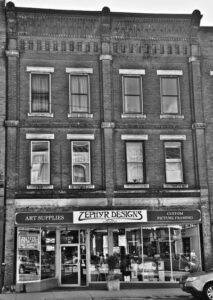 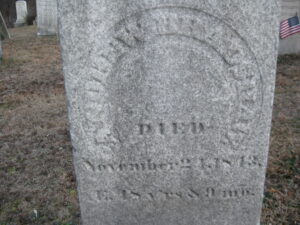 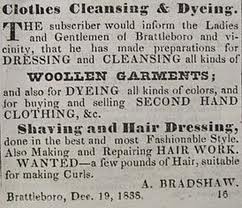