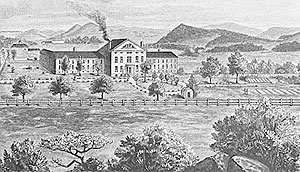 Go north on Main Street through downtown Brattleboro, past the library and bubbling Wells Fountain, and you’ll crest the hill onto a public park. Look through the trees and you’ll see flickers of an elegant clock tower. This clock tower watches over college-like campus of the Brattleboro Retreat, a pioneering mental health hospital that has been a cornerstone in Brattleboro since 1836. The Retreat and it’s grounds encompass more than 1000 acres along the West River, from its stately campus and adjacent farm to a networks public trails and even a haunted tower.

Brattleboro Students on the Retreat

This podcast produced by Joe Rivers and his Brattleboro Area Middle School students recounts the origin story of Brattleboro Retreat and Anna Marsh, the woman who founded the hospital in 1834, then called the Vermont Asylum for the Insane.

These student podcasts are not included in the final Brattleboro Words Trail audio stories.