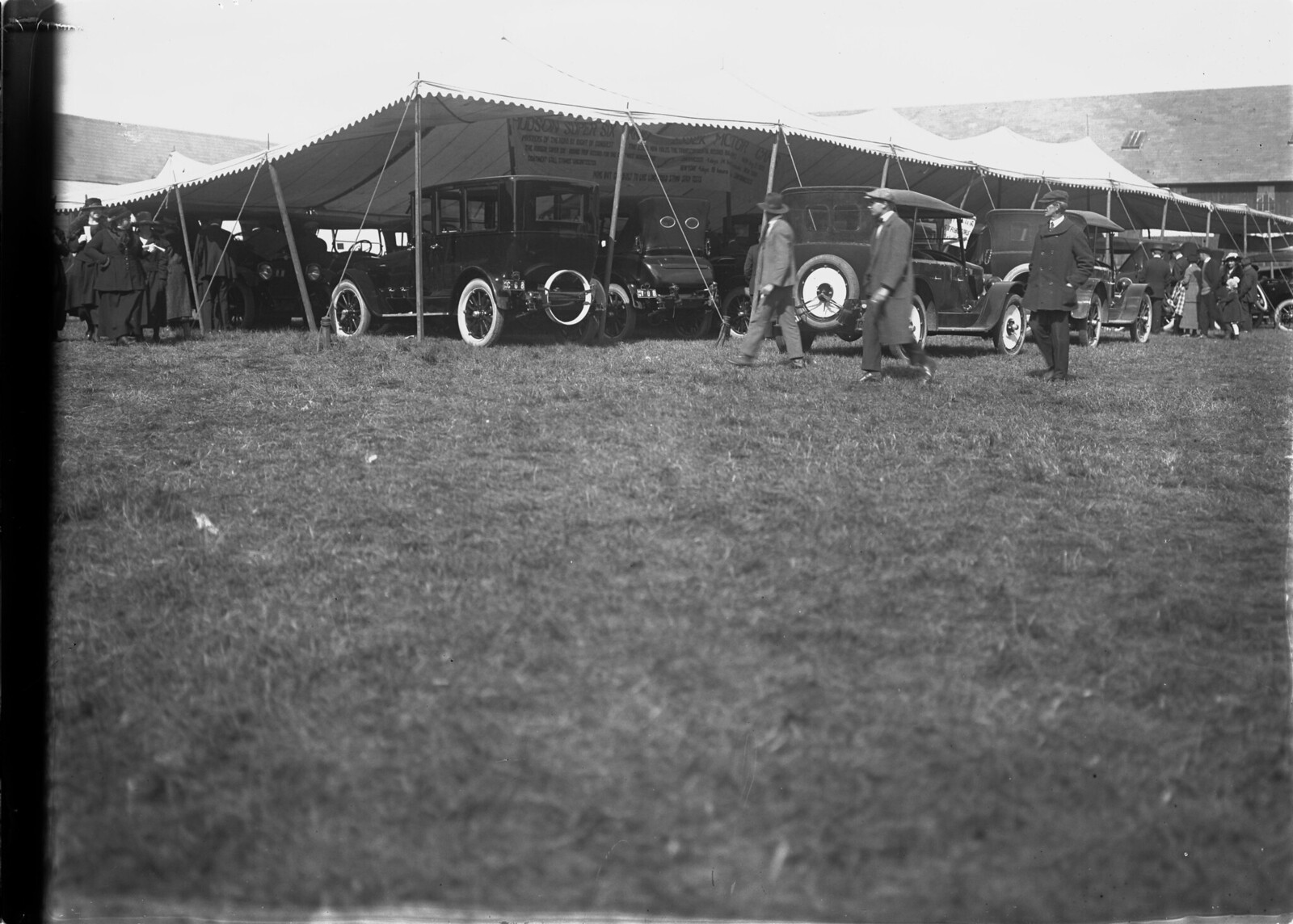 The Valley Fair in Brattleboro began in 1886.  It was held for one day in the 2nd week of October and had over 5000 people attend.  Farmers exhibited cattle, horses, poultry, sheep, pigs, dogs, fruits and vegetables, and many ribbons were awarded.

It was an agricultural fair and the local organizers prided themselves in keeping the event alcohol-free, family friendly and without the Midway or carnival-like attractions that others incorporated into their events.

The first year resulted in a $300 profit and from there the Valley Fair Association was formed.  The organization purchased land which presently includes the high school, middle school, career center and town garage, and the Fairgrounds was established.

Since 1846 agricultural fairs had been organized in Brattleboro but they had been sponsored by outside organizations like the agricultural societies of the Connecticut River Valley, Windham County, Vermont or New England.  The Valley Fair was a completely local project run by Brattleboro townspeople.

In the 1880’s, Vermont was mostly an agricultural society and a fair near the end of the growing season was a way to bring people together. Farm families brought their best livestock, produce, baked goods, and needlework for competition and blue ribbons. They exchanged information about improving the quality of their crops, and they enjoyed the opportunities for social exchange and good fun.

In the early years of the Valley Fair each year was bigger than the one before.  By 1890 the Fair was two days long, had over 18,000 people attend and filled the town with visitors from New England and beyond.  Over 2000 people arrived by train in order to attend the activities.

Admission was 25 cents a day and the event grew beyond the Fairgrounds.  A Cavalcade was added to the Fair in 1890.  Decorated wagons, floats and carriages were paraded from the Commons at the top of Main Street, through town, to the Fairgrounds.  Individuals, families and local companies got into the act and tried to outdo one another with creative decorations that would “wow” the crowds.  Fair supporters decorated Main Street as well and the whole town began to participate.

In the 1890’s other events were added to the agricultural fair to draw more people.  Attendance climbed over 20,000 and never went below that number for the next 20 years.  Hot air balloonists would launch into the sky, then jump from 2000 or more feet and float to the ground with parachutes.  Vaudeville acts became a part of the show and performed on the infield of the horse racing track.

In the 1900’s attendance averaged over 25,000.  The daily ticket price rose to 50 cents.  Automobiles replaced horse drawn vehicles in the Cavalcade Parade through downtown.  The Fair expanded to three days and local businesses called it “Fair Week.”  Events were held in the Auditorium, and other buildings, before and after the Fair to expand visitors stays.  Just about every business in town had “Fair Specials” and many stores closed in the afternoons so everyone could attend.  The Brooks Hotel advertised in local papers for townspeople who were willing to rent out rooms in their houses to those traveling to Brattleboro for the Fair.

Near the end of the first decade of the 20th century, the Fair began to struggle a bit.  James Fisk Hooker became the President of the Valley Fair Association and, under his leadership, the Fair began to run a deficit.  While attendance was still over 20,000 a year, the costs to run the Fair increased.  Under Hooker’s leadership Midway games were introduced, but the deficit continued to grow.  Some thought Hooker was not a good manager, and maybe even a little crooked.

Luckily, James Fisk Hooker moved to New York, new officers were elected, they were able to cut expenses and by 1912 the deficit was gone.  A fresh event was added which drew new attendees, a modified marathon that began in Hinsdale and ended at the Fairgrounds.  Runners from the Olympic track team participated and brought a new energy to the Fair.

In 1916 and 1917 an epidemic of infantile paralysis was feared and the Fair was cancelled both years.  The Fair Committee had spent money to get ready for the Fair each year and, as a result, the deficit was back.  In 1918 rain fell on all three Fair days and the deficit grew to $11,000.  The Valley Fair Committee and the town had to decide what to do.

In 1918 it was decided to reorganize.  Valley Fair stocks were sold at $25 a share and $15,000 was raised.  The new capital erased the deficit and allowed the Fair to continue.  The newly organized Fair Committee cut the Fair back to two days and introduced airplane stunts and rides at the Retreat Meadows to keep up with the times.

As the 1920’s began the daily admission fee was raised to 75 cents.  The Fair was beginning to show its age and reflect changing society.  In the Brattleboro Reformer, high school students wrote about how they weren’t interested in agricultural fairs like their parents were a generation ago.  They wrote about how they liked to sleep in and enjoyed the comforts of town life over their parents’ lives in the country.  They politely argued that agricultural fairs were no longer relevant to young people’s lives.  They also gave examples of how the various competitions at the Fair were ultimately disappointing.  Best baby contests, best baked goods, Midway games that could never be won…

In 1922 the corruption of Midway games was exposed when one of the operators was caught cheating.  The game required a participant to roll a ball into cups and the game was found to be rigged.  It led to a scandal which caused all future Midway games to be inspected before they were allowed.

In 1927 night entertainment with fireworks and more vaudeville acts was added but the costs proved to be more than the increased attendance brought in.  Reorganization occurred in 1918 and in eleven of the thirteen years after re-organization the Fair spent more money than it took in.  Fewer people were attending and expenses continued to rise.  In 1931 the Fair Committee found itself over $7,000 in debt.  Proponents of the Fair wanted it to evolve into activities that could draw more people, but the organizers were not interested in introducing more activities that went beyond the original family friendly agricultural fair of the 1880’s.  After a great deal of discussion it was decided to sell the Fairgrounds to the town for $8,000 and dissolve the Valley Fair Association.

Here you can find two rare video clips of the Valley Fair in 1931. https://archive.org/details/valleyfair1931

In a 2010 interview with Brattleboro’s Midge Dunham, she said the Fair became “too expensive” for her family.  The Great Depression was in full force and money was tight.  “My mother would pack us all lunches so when we got hungry, we wouldn’t have to pay the Fair prices.  But we still always wanted the cotton candy.”

Twenty years after the close of the Valley Fair the Brattleboro Union High School was built on its site.  The BUHS auditorium is located where one of the main agricultural display buildings used to be.  The flagpole in front of BUHS is where the Ferris Wheel would get set up each year and the half mile horse racing track used to run in an oval from the present baseball field to the tennis courts.

Then again, twenty years before the Valley Fair began, the land was used as a military camp and hospital during the Civil War.  Fairground Road has been a busy place for a long time with thousands of people engaged in a variety of cultural activities that help define our valley.