On the east side of Main Street, near the junction of Main and Elliot, is an old brick building with the name “Union Block” highlighted in raised bricks at the top of the third floor.  Between the second and third floors is a large bronze plaque, bearing the name “Amedeo de Angelis”, with the United States Seal depicted at each end of the plaque.  Have you ever wondered how the building ended up with these two monikers?

In 1856 Cyrus Wyman, a grocery man, moved to Brattleboro from Grafton. The Vermont Valley Railroad had contracted with him to supply goods for the railroad men while they constructed the train lines through Windham County. Wyman had done very well for himself and decided to move to a larger town where there was more opportunity.  Soon after arriving in Brattleboro he opened a grocery store in a small, one-story building which stood on the site of the present Union Block.

According to the local paper, the Vermont Phoenix, “the building was torn down and Mr. Wyman and Seth Herrick erected in its place Union Block, a three-story brick building, each owning a half interest.”   The construction of the building was begun in June, 1864 and completed in the same year. Because the commercial block was built during the closing days of the Civil War it is theorized that the name “Union Block” came from the patriotic feelings of the two owners. 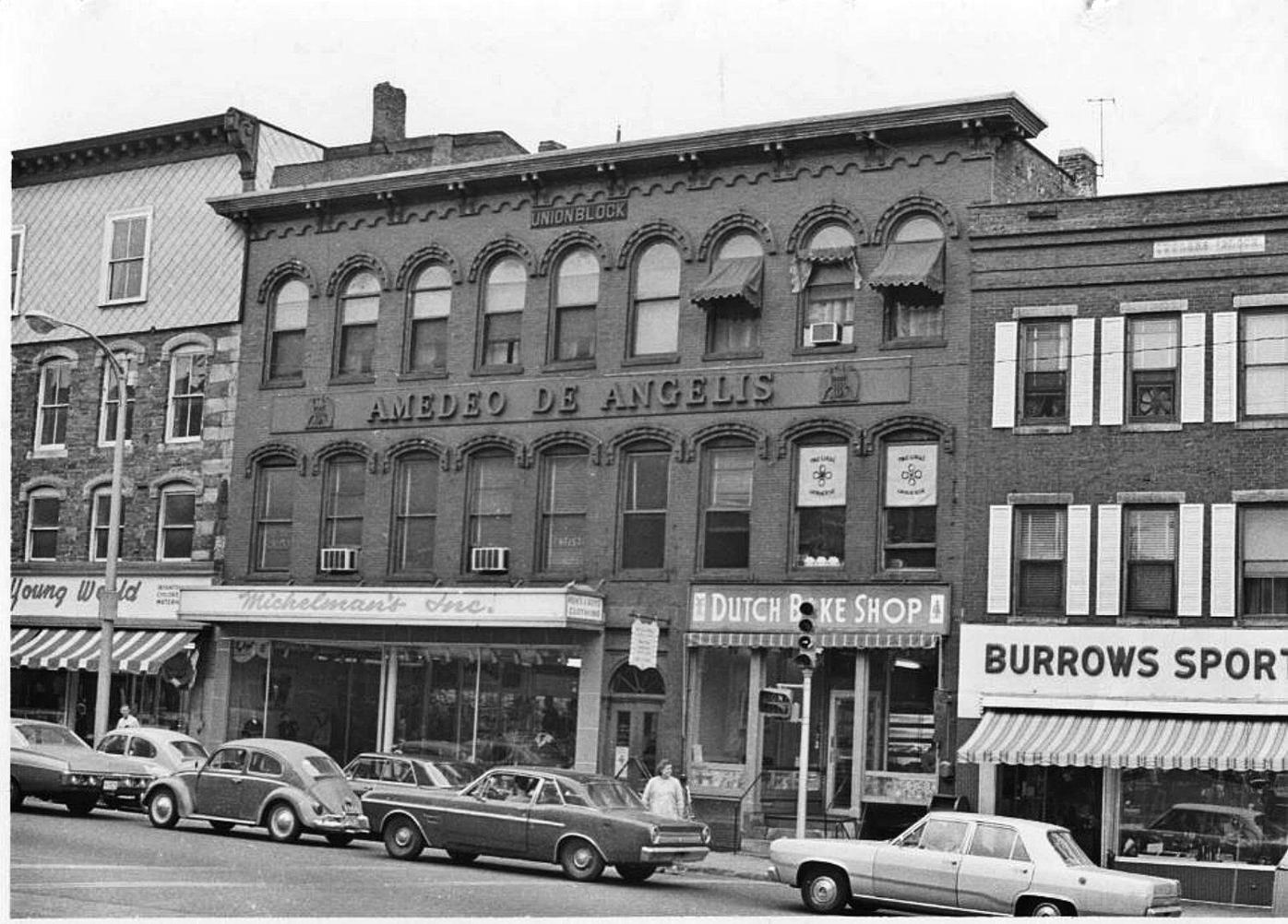 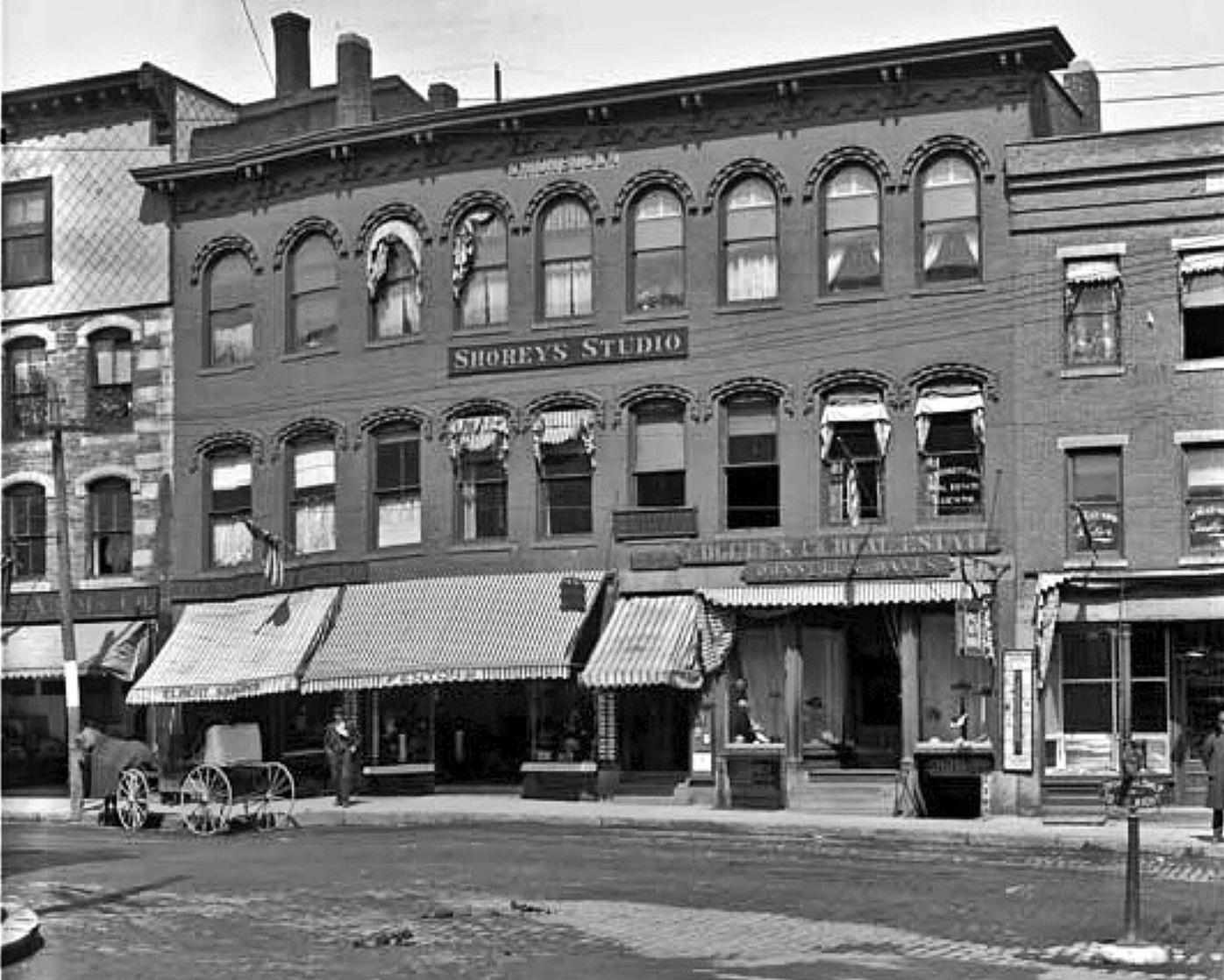 In 1870 Cyrus Wyman and Seth Herrick were also among the founders of the Brattleboro Savings Bank.  Wyman was an interesting character in the life of the town.  As Mary Cabot wrote in the Annals of Brattleboro, “He was a man of strong convictions and active in unpopular movements.”

Wyman was a long-time supporter of women’s rights and served, at various times, as President and Treasurer of the Women’s Suffrage Association of Vermont.  He also campaigned for prohibition and once ran for Vermont Governor on the Prohibition Party ticket.

Wyman’s business partner, Seth Herrick was a West Brattleboro farm boy who began his adult life working in local businesses on Main Street.  He worked for a butcher and also worked for baker.  The bakery was located near Wyman’s grocery store and he and Wyman developed a friendship.  Herrick became a deputy sheriff in 1861 and supplemented his income when he also took the job of town tax collector in 1862.  He partnered with Wyman to build Union Block in 1864 and began his political career in 1866 when he served in the State Legislature.  From there he served on the town selectboard for twenty years, between 1868 and 1888.  Both original owners of the Union Block were very involved in local and state affairs.

Seth Herrick died in 1895 and Cyrus Wyman passed away in 1904.  It is not known if Wyman ever met Amedeo de Angelis.  In 1902, at the age of fifteen, De Angelis emigrated to the United States and Brattleboro.  He immediately began working for his uncle, Bernardo Mancini, in a shoe repair business located in the basement of the Union Block.

Amedeo was born in Popoli, Italy and learned the shoemaking trade from his father, who had a large shop on the outskirts of Rome.  Amedeo attended school until he was fifteen and came to America when his uncle invited him to Brattleboro.

Amedeo’s younger brother, Charles, came to Brattleboro a few months after Amedeo and he also worked for Uncle Mancini.  In 1905 Mancini sold the shoe repair shop to eighteen year old Amedeo, and Charles worked for Amedeo before branching out on his own.  Soon there was a DeAngelis shoe repair shop in the Union Block and also another one on Elliot Street.

Two more brothers came to Brattleboro and the older brothers helped them get established.  Amedeo and Charles both purchased property in the working class section of Brattleboro on Canal St., Reed St. and South Main Street and became landlords as well as shoe repairman.

Amedeo married Elvira DeScipio in 1906.  Charles went back to Italy to marry Gina Zino in 1914, a marriage arranged by the DeAngelis parents.  Charles returned to Brattleboro with his bride and the families soon had a very public falling out.  Three of the brothers, and their wives, charged one another with slander, thievery and operating tenements filled with prostitution and illegal alcohol. These court charges were published in papers throughout Vermont.  A few days later the families got together and settled their differences out of court.

In 1913 Amedeo took his young family to Italy during Christmas time to visit his aging parents.  They were able to stay for a few months and two of his daughters remained with his parents in order to learn the Italian culture first hand.  Unfortunately, World War I began and Amedeo was not able to go back to Italy to get the girls until after the war ended in 1917.

In 1917 Amedeo DeAngelis bought the Union Block from Frederick Childs, former postmaster of Brattleboro.  Childs had purchased the building from the Herrick/Wyman heirs the previous year.  At the time, there was a clothing store, millinery store, confectionary store, real estate office, dental office, printing office and photography studio in the building.  On the third floor there were apartments and Amedeo DeAngelis continued to operate his shoe repair shop in the basement.

DeAngelis continued with his shoe repair shop and rental property ownership.  He was a successful landlord and businessman.  In 1946 he turned the shoe repair business over to two of his sons, Anthony and John, when they returned from World War II.

In 1951 Amedeo DeAngelis died while vacationing at his winter home in Saint Petersburg, Florida.  As part of his will, his heirs were instructed to purchase a bronze plaque with his name prominently displayed, including the United States Seal located on either end.  The plaque and installation cost was about $12,000.  DeAngelis was very proud of his Italian heritage.  He was also very proud of his American citizenship and the successful way he was able to pursue the American Dream.

That’s how a grocery store clerk, a West Brattleboro farm boy and an Italian immigrant left their marks on Brattleboro’s Main Street.