At the beginning of 1888 there was a toll bridge between Brattleboro and Hinsdale, NH which traversed the island in the middle of the Connecticut River.  This toll bridge crossing had existed for over 80 years and was a private enterprise.  During the year it was proposed that Hinsdale and Brattleboro go in together to “free” the bridge by purchasing it from corporate owners. By eliminating future tolls it was thought that commerce between the two towns would improve and travel between NH and Vt would become more egalitarian.

Each town held special votes.  Hinsdale voted first and thought they should contribute $5,000 for the purchase, and then cover ¼ of future maintenance costs.  Brattleboro voted to contribute $10,000 and cover the remainder of the maintenance costs.  In November, 1888 the deal was struck, the bridge purchased, and travel between Brattleboro and Hinsdale became “free”.

Meanwhile, in 1887 a Chesterfield resident petitioned the NH government for the right to run a ferry between Brattleboro and Chesterfield.  This request was denied and it became the impetus for the town of Chesterfield to pursue the establishment of a bridge between the two towns.  The leaders of both towns entered into negotiations which resulted in the June, 1889 opening of the suspension bridge between Chesterfield and Brattleboro.

In the late 1800’s it was unclear as to where the actual boundary between NH and Vt was located.  Vt. claimed it was the halfway point in the Connecticut River between the two shores.  NH claimed it was the low water mark on the western shore of the Connecticut River.  In 1933 the US Supreme Court sided with NH’s boundary claim so NH is now mostly responsible for bridge costs between the two states.  For instance, costs for the soon to be started replacement bridge between Hinsdale and Brattleboro will be split 83% NH and 17% Vt.  Back in the 1800’s this was not the case.  Each border town negotiated with the adjoining border town to come to an agreement; or not.

In 1817 Chesterfield first attempted to build a bridge between Dummerston and Chesterfield but could not come to an agreed upon cost with the Vt. town.  In 1848 Chesterfield tried again, and entered into negotiations with Brattleboro for a shared bridge but those talks also failed to generate a successful result.  People in Chesterfield had to travel the Mountain Road between Chesterfield and Hinsdale in order to get to Brattleboro and it was a very poorly maintained trail.  As one Chesterfield resident said in 1889, “All these years the Mountain Road, one of the hardest pieces of road anywhere about here, has been a bugbear to Chesterfield people.”  By the way, a “bugbear” is a cause of obsessive fear, irritation or loathing.

So, in 1889 it was a great thing to have the suspension bridge join Brattleboro and Chesterfield.  The front page headline in the Vermont Phoenix claimed the bridge was “Solid, Graceful and Handsome”.  The paper went on to say, “The bridge in actual use seems remarkably strong and substantial.  The total cost was $12,675—$8,175 of this sum being paid by Chesterfield and $4500 by Brattleboro…Had we been told a year ago that we should now have two free bridges across the Connecticut River the statement would have been received by incredulity.  But today it is an accomplished fact and Brattleboro’s borders are open to whoever will come and go.”

Site work for the Chesterfield suspension bridge began in January, 1889 and continued with iron towers going up on abutments in early May.  Cables were strung and the flooring was finished the first week of June.  About 1000 people gathered to celebrate the opening of the bridge.

The official opening was highlighted with speeches from town dignitaries from both sides of the river and a clambake held on the Chesterfield side.  Colonel George Hooker, chair of the Brattleboro selectboard wrapped up the event by saying he hoped “every Brattleboro merchant would sell his goods so low that no Chesterfield or Westmoreland man would go to Keene to trade.”

Broughton D. Harris, one of the Brattleboro bridge commissioners, spoke at the 1889 opening ceremonies and said he was confident the bridge had “ample strength and permanent endurance”.  However, by February, 1915 the suspension bridge was in trouble.  Ice flows lifted the bridge four inches off its foundation and men were sent out to chop ice to get the bridge back on the ground.  As a result, one of the girders on the NH side was permanently bent from the ice pressure.

In 1921 an engineer was hired to evaluate the suspension bridge and the report was alarming.  The bridge had been built for horses and wagons and was now dealing with trucks and automobiles.  The engineer said the bridge should be replaced and recommended a steel bridge.

Chesterfield did not want to shoulder the expense of a new bridge and had a traffic survey completed.  On average there were about 500 vehicles that traveled over the bridge each day.  The vast majority of them were not from Chesterfield and the town used this data to argue that a regional or state-wide financial response was needed to pay for a replacement bridge.  No other government entity was willing to pitch in and the bridge continued to limp along.

By 1935 the continued excessive weight on the bridge caused the trusses to buckle.  Guards were posted at the bridge to stop any heavy traffic from attempting to use the span.  Late in 1935 the NH and Vt legislatures finally passed acts which relieved Chesterfield and Brattleboro from the expense of bridge replacement.

On March 10, 1936 a front page newspaper headline said, “Suspension Bridge To Be Replaced”.  An article went on to explain that NH and Vt had finally struck a deal and the condemned bridge would be replaced with an iron bridge within the year.

The next day the US Weather Bureau warned of possible New England floods because of predicted heavy rains, combined with melting snow.  For three days more than 5 inches of rain fell in Vt. and NH.  The Connecticut River began to swell and ice poured over its banks. 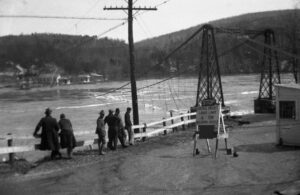 At 3:45 pm on March 18 the suspension bridge washed away.  It was one of thirteen bridges in the area that were destroyed during the flood.  For a while there was discussion of eliminating the suspension bridge location in Chesterfield and the island bridges in Hinsdale in order to make one bridge between Brattleboro and both Hinsdale and Chesterfield. The argument made by the proponents of the one bridge proposal was that the island which supported the bridges between Hinsdale and Brattleboro was quickly being washed away by yearly floods. The island had shrunk from 30 acres to 3 acres in a short period of time. It was believed by some that the road on the island between the bridges would not survive much longer.  Supporters of creating one bridge to replace the Chesterfield and Hinsdale bridges wanted to build a span over the Connecticut River that would be elevated over the railroad tracks on the Brattleboro side of the river.

The one bridge proposal included improving the Mountain Road that ran along the western edge of Mt. Wantastiquet.  NH would then connect the road with Brattleboro by building a bridge which would land somewhere near the town’s Walnut or Bradley Streets. Traffic on the Mountain Road from Chesterfield and Hinsdale would converge at the bridge and cross into downtown Brattleboro.  This idea, while having some merit, proved too complicated.  Ultimately the Chesterfield suspension bridge was replaced with an iron bridge and the one bridge idea was forgotten.