From 1900 to 1950 Brattleboro’s population, on average, increased by 1000 people per decade.  In 1900 the population was about 6,500 and by 1950 the census stated there were about 11,500 people in town.  The 30’s and 40’s saw a great deal of pressure to find more land to develop.  Stores and businesses crowded the downtown area.  Parking was at a premium and, in 1940, the selectboard declared new businesses would need to provide their own parking. 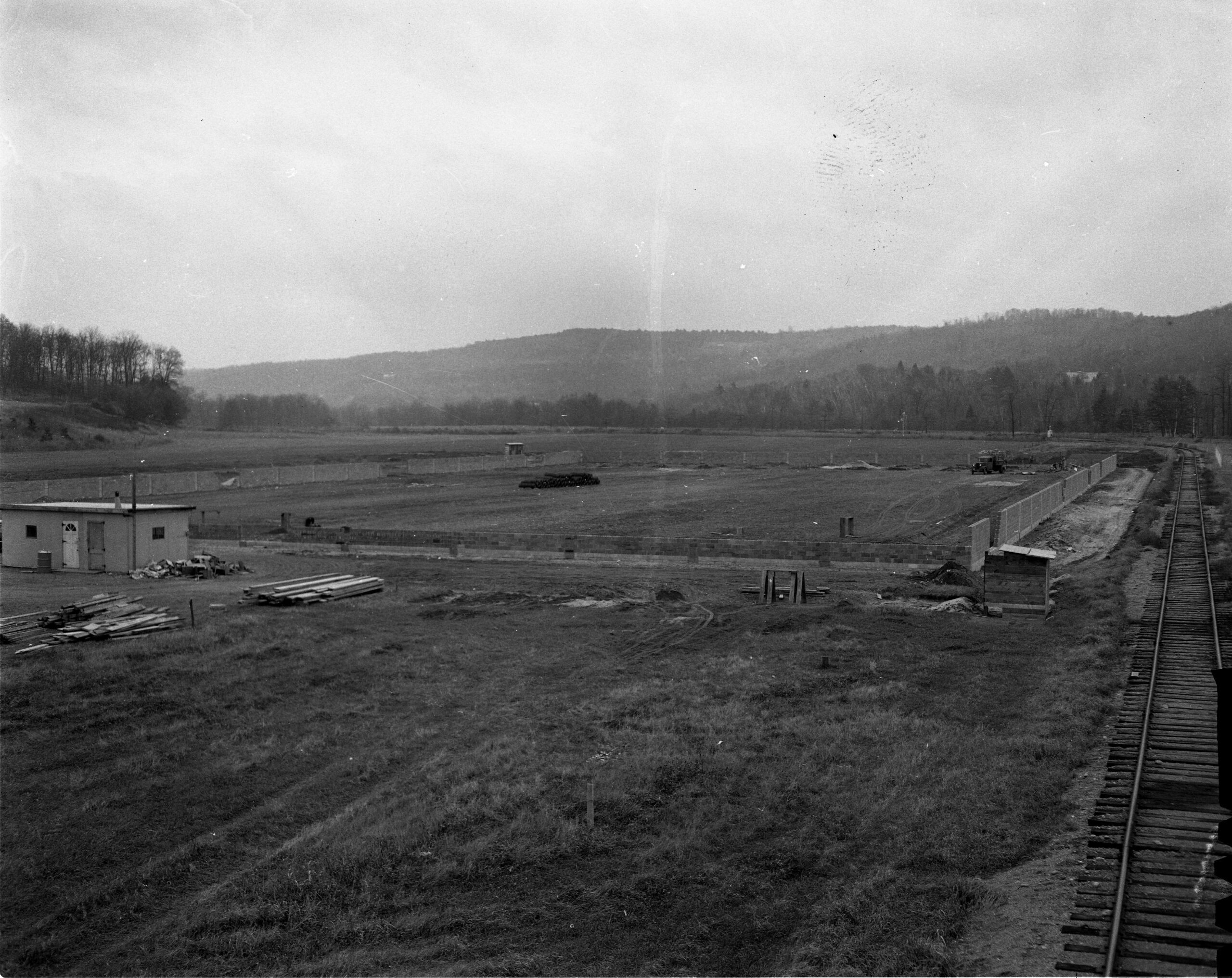 The Brattleboro downtown shopping district was struggling.  As the automobile took hold of American culture it was clear there were not enough parking spaces to accommodate all of the existing demand generated by downtown offices and businesses.

Earlier, in 1938, a zoning ordinance had been passed and implemented in Brattleboro.  In this plan Putney Road was zoned rural and the farms that made up the majority of the land along the road flourished.  However, in 1940 there were businessmen in Brattleboro who saw all of that flat land out on Putney Road and thought it might be the answer to the downtown shopping district’s overcrowded parking conditions.  A selectman was quoted in the paper as saying new development of stores and industry should only proceed if the buildings were set back from the road and had appropriate parking located between the building and the road.

In the beginning of September 1945 World War II ended.  Brattleboro was able to catch its breath and contemplate its future for the first time in years.  As a result, as September came to a close, the town zoning board recommended to open Putney Road development to commercial and business interests.  This was a real game changer.

Much of Putney Road was dominated by farms and open land.  A few businesses had opened on the north side of the West River Bridge and houses had recently been built as well.  On September 26, 1945 the zoning board held a hearing to rezone Putney Road, from the West River Bridge to Old Ferry Road. The proposed zoning changes suggested land that had previously been labeled rural was going be rezoned commercial, business or industrial.  The Thomas farms that dominated the Putney Road landscape would quickly come under pressure to develop their open fields. 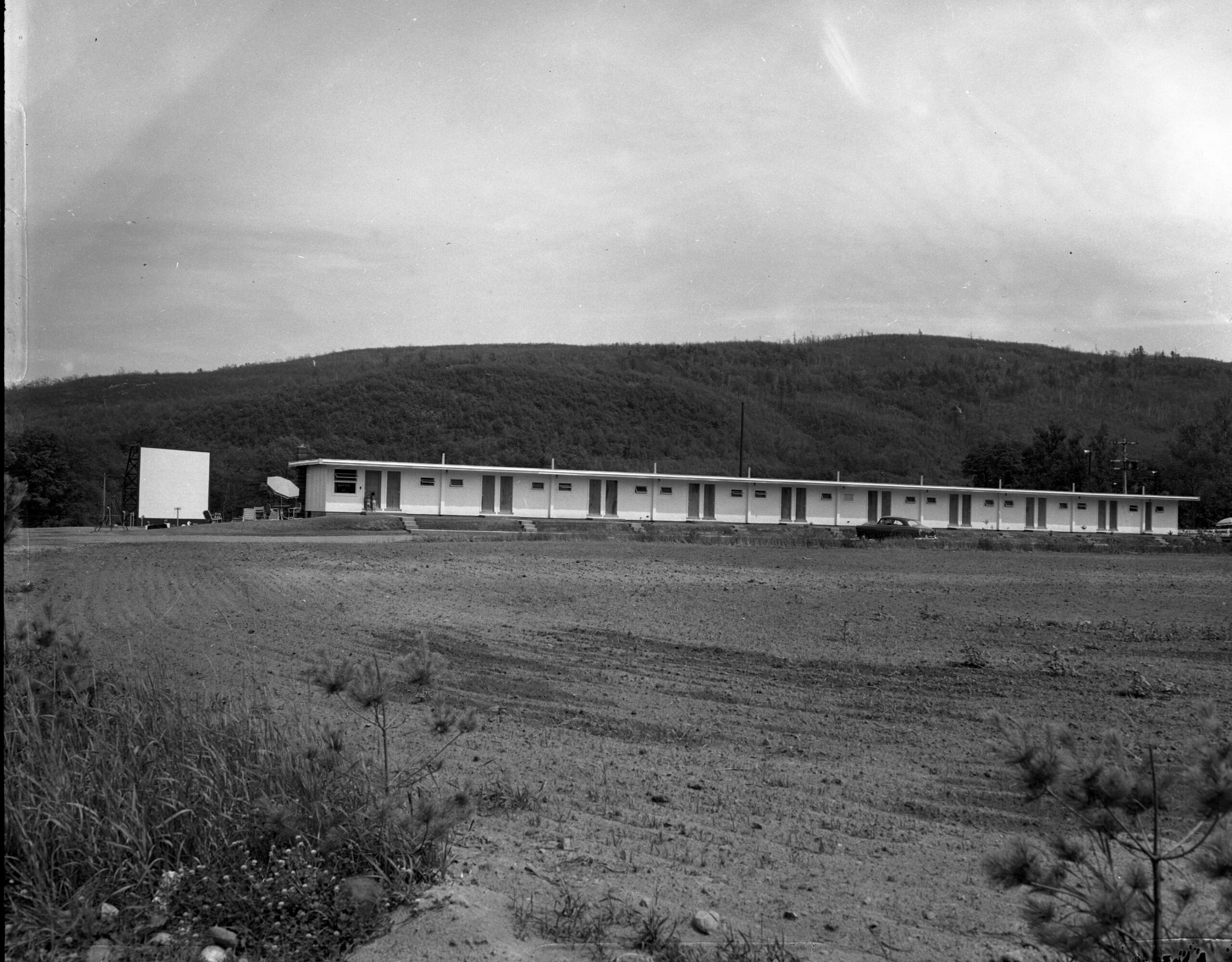 The hearing was contentious.  Many landowners on Putney Road voiced concerns about destroying the rural residential nature of the area.  Those interested in further business development stated that Putney Road was the obvious place to develop next.  The argument was that decisions in the past few years to bring town water and sewer to the road had been done with the idea that development would follow.

The zoning hearing in September 1945 ended with no decision, but the die had been cast.  Putney Road was going to be developed.  If not all at once, then piece by piece.  After two more years of hearings a zoning proposal was adopted that did not rezone the entire Putney Road from the West River Bridge to Old Ferry Road, but did commercially rezone most of it.

Five years earlier Putney Road landowners had placed a great deal of pressure on the selectboard to run water and sewer lines past the West River Bridge out to Putney Road residences and businesses. They claimed it wasn’t sanitary to have businesses and houses build up along Putney Road without these town services. Residents argued that from 1935 to 1940 many buildings had sprung up in the area. These new buildings had constructed septic systems and wells too close to one another and were a health risk.

The selectboard’s practice was to support the extension of town services if residents and landowners were willing to pitch in 10% of the costs for running those services to the desired locations. Putney Road landowners were not interested in this offer but continued to petition for water and sewer services.

The landowners persistently pressured the selectboard and within two years town water was run north along Putney Road all the way out to the bridge to West Chesterfield. In 1942 American Optical opened on the northeast corner of Routes 5 and 9. The business employed over 300 people and operated with the use of a great deal of town water.

By 1945 the town sewer system also extended out along Putney Road and it was in 1946 that Howard Johnson’s Restaurant opened on the southeast corner of Routes 5 and 9. In 1955 the Alan Browne Book Manufacturing Plant, (known locally as the Book Press), opened just north of American Optical. Within ten years the business would grow to employ almost 900 people.
Development continued along the strip of Putney Road.

Another big change was the arrival of McDonald’s in 1974. At that time Putney Road was a blend of commercial and agricultural businesses. The company that bought the land for McDonalds paid $90,000 for property that was valued by the town at $9,000. The land purchase at ten times the market value became a turning point in the development of Putney Road. 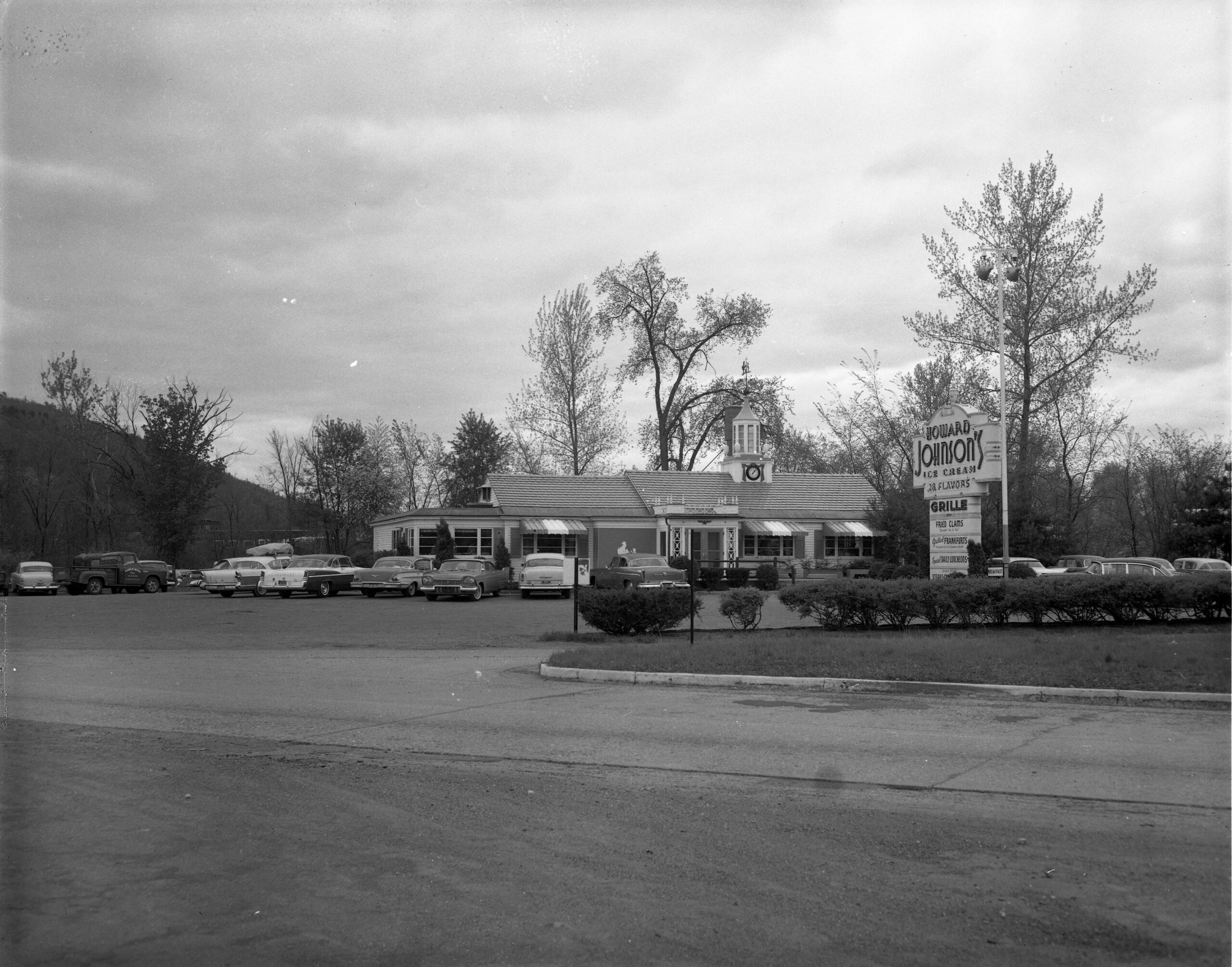 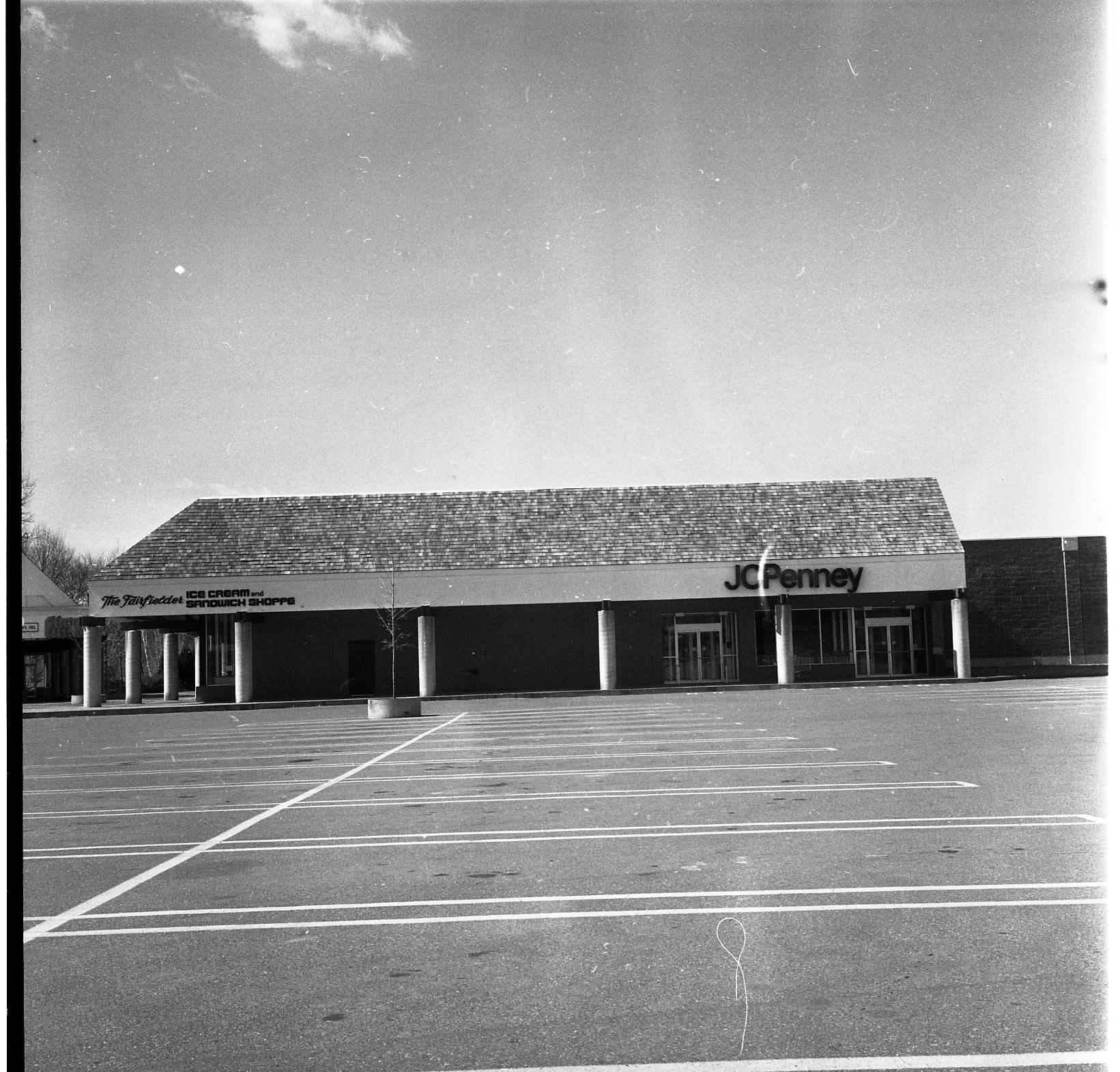 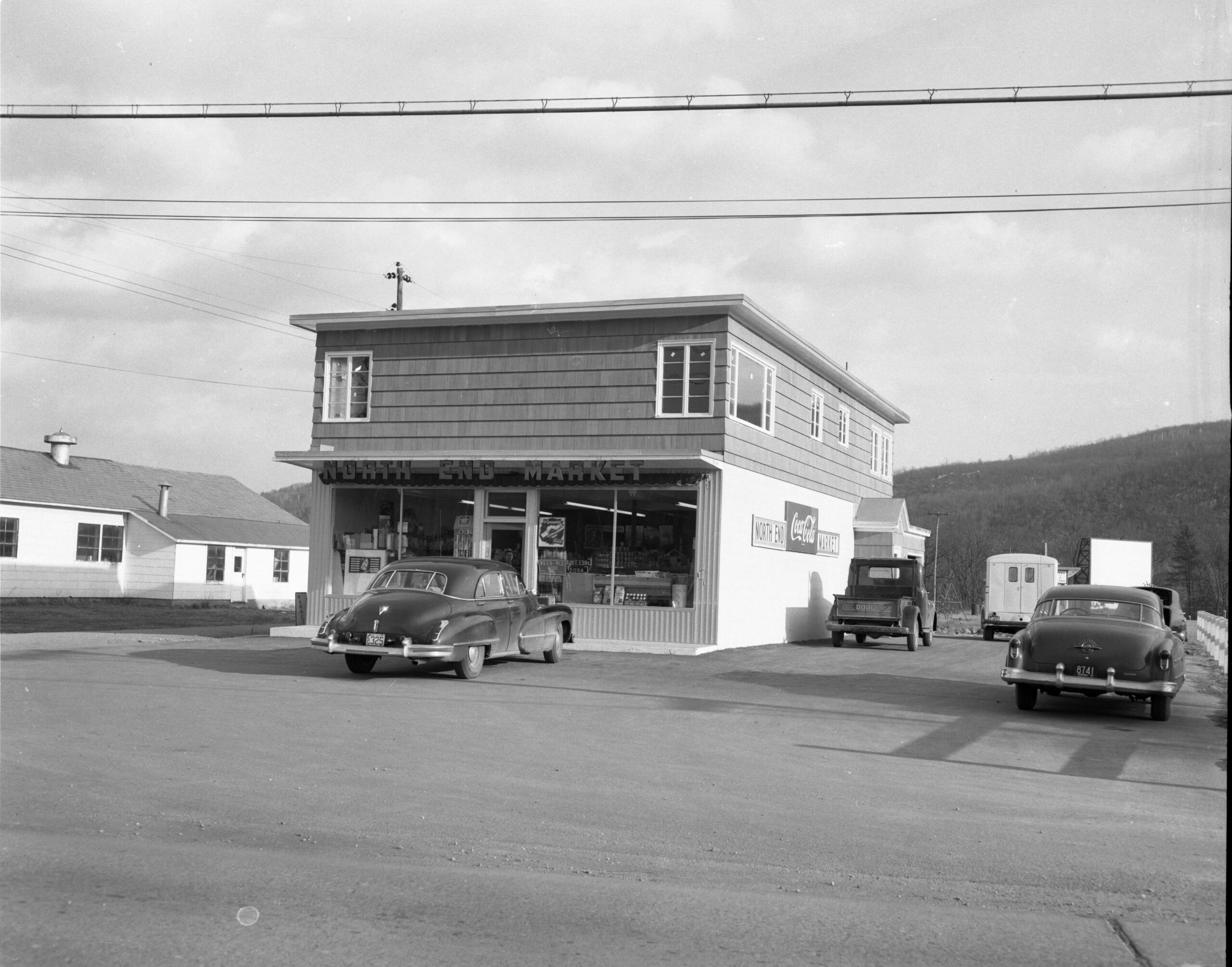 Beginning in the 1950’s with the demolition of Town Hall on Main Street, civic leaders had been doing what they could to keep anchor businesses in the downtown area.  WT Grant Department Store replaced the Town Hall and Grand Union built its own parking lot and store on the bank behind the post office. However, the building of McDonald’s in the 1970’s accelerated the migration of businesses from Main Street to Putney Road.

Agway set up shop in front of the Book Press.  Kentucky Fried Chicken built on Putney Road.  JCPenney, Grand Union, Ames Department Store and the OK Fairbanks Supermarket all opened on Putney Road in two shopping centers.  A movie theater was built across from the A+W and the Ford dealership on Flat Street moved out to Putney Road as well.

By the 1970’s, the 1940 selectboard dream of stores and businesses set back on Putney Road, with their own parking lots constructed in front of them, had come to fruition.  In the 1940’s, what we now call strip malls were thought to be “progress” that alleviated a problem;  parking congestion in New England’s crowded downtowns.  Now Putney Road is trying to re-imagine itself with proposed roundabouts, sidewalks and landscaped medians. Time will tell what the next decade will bring.