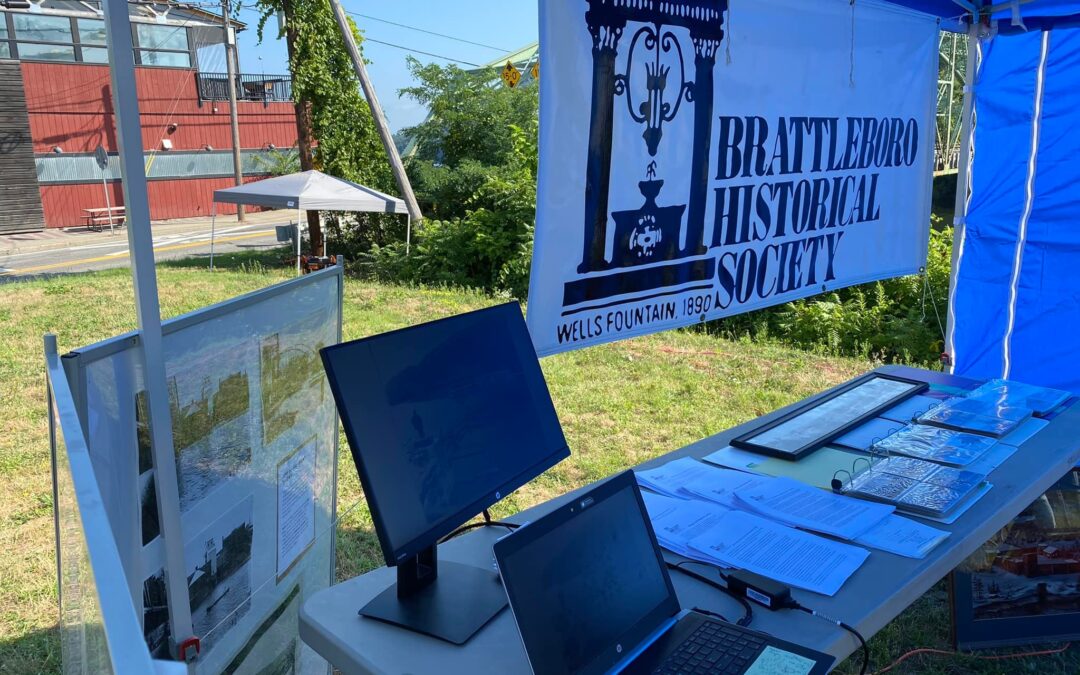 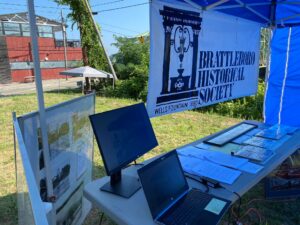 Ten years ago the space at the junction of Depot and Bridge streets, bordering the Connecticut River, was transformed into a small park. The park is a happy result of community efforts to refurbish and reimagine the railroad station area that have their origins going all the way back to the 1970’s.

The Vernon Historians were also in attendance and we had a fun time together sharing stories of the Connecticut River Valley. Our Society had a tent featuring a media presentation of historical photos of the river. Images of Island Park, Fort Dummer, boating, logging, flood impacts, commercial development, railroads, and outdoor activities going back to the mid-1800’s will be the focus.  Historic postcards and photos were on display. Handouts and pamphlets that described historical aspects of the river and how people have interacted with the waterway were also available.

We were very pleased to be a part of this community event focusing on our historic and on-going relationship with the river. Indigenous People established themselves in this place long before recorded history. The river was a source of food, a means of transportation and a link to trade throughout the Northeast. Over the centuries many native artifacts have been found here.

By the end of the century John Holbrook was a leading local flatboat owner and merchant who used the river to trade along the eastern seaboard, including exchanges with the Caribbean “slave islands”. The profits from that trade helped provide the capital to establish a commercial and industrial center for Brattleboro beside the river. The area now known as “downtown”.

As the 1800’s unfolded, flatboats were supplemented with steamboats. In 1849 railroad tracks were laid down next to the river and the first trains arrived. The tracks along the Connecticut River effectively severed town access to the waterway and trains became the main means to transport goods.

The vast logging runs on the Connecticut River began around this time as well. The drives would begin in late March and end in early September as logs were delivered to saw mills in northern Massachusetts. The log runs ended a little more than 100 years ago.

The Vernon Dam was constructed in 1909. The dam caused a general rise in the water level and drastically changed the river ecosystem. Floods in the 1920’s and 30’s caused severe damage and loss of life. The river, once Brattleboro’s commercial engine, had become a dangerous natural adversary.

Since the 1700’s mills and factories used the river as a power source. Economic development and population growth brought pollution to the river. It became a dumping site and sewage was piped directly into the river. By the 1900’s the river became environmentally unsafe. It was called “America’s best landscaped sewer.”
By the middle of last century local, state and national governments began to take steps to clean up the river. Fifty five years ago Brattleboro’s first wastewater treatment plant opened. The Connecticut River Watershed Council was formed in 1952 to address pollution problems. The river, and its tributaries, are much cleaner now than they were decades ago. Presently the watershed in our area is tested often and is regularly deemed safe for boating and swimming.

The historical society was excited to participate in the RiverFest. Supporting efforts to celebrate the many ways people have benefited, and continue to benefit, from the Connecticut River watershed is worthwhile. We hope putting a spotlight on the river will cause many of us to more fully appreciate all of the natural wonder found within the watershed.